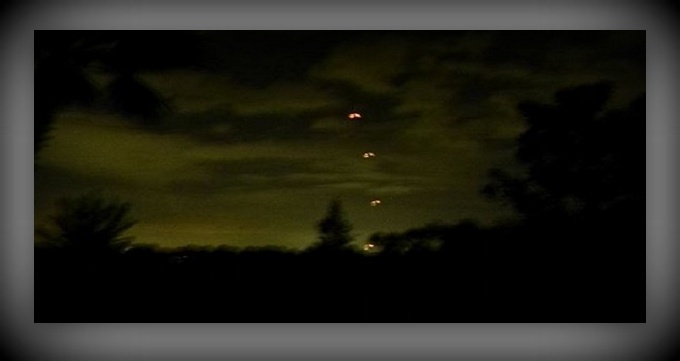 AMAZING PHOTOS OF ALIEN CRAFT OVER FLORIDA
.
JULY 8, 2012  …………  CLERMONT FLORIDA
.
I was at my brothers house in Clermont, Florida on 7-8-12 when I went out my bedroom door to the back yard. I saw some strange Objects like fire balls coming up in a line 5 or 6 of them. I don’t know what direction they where coming up in. I went back in and got my camera and started taking pictures. When I first started taking the pictures as the Objects came up in line behind each other they where very clear but has they started moving so fast as I would take the pictures they would blur and they could change directions so fast. I continued to take pictures until it was like they disappeared. I told my wife and brother and his wife to come out and see right quick and look at what I was seeing. I asked them do you know what that is and we all said I have never seen anything move and change direction at a 90 degree angle like this object did. I watched the for just a few seconds more going toward the stars and it was as they just disappeared. The next night I told my wife, my brother, and his wife the next night I was going to see if this happened again. This was 7-9-12 at 21.15 at night when the Objects came up again in line again 5 or 6 of them. Again I started taking picture again and called my brother and his wife and also my wife to see again what we where seeing. None of us could say what it was because of the way it changed directions so fast again at 90 angles. We all started kidding each other maybe is a UFO. But none of us could give a good explanation what we had seen. I took some 27 picture and have showed them to many people and they cannot tell me what they are looking at.
.
THANKS TO WWW.MUFON.COM CASE FILES.
.
KEN PFEIFER WORLD UFO PHOTOS AND NEWS
WWW.WORLDUFOPHOTOSANDNEWS.ORG
WWW.WORLDUFOPHOTOS.ORG
.
.
.