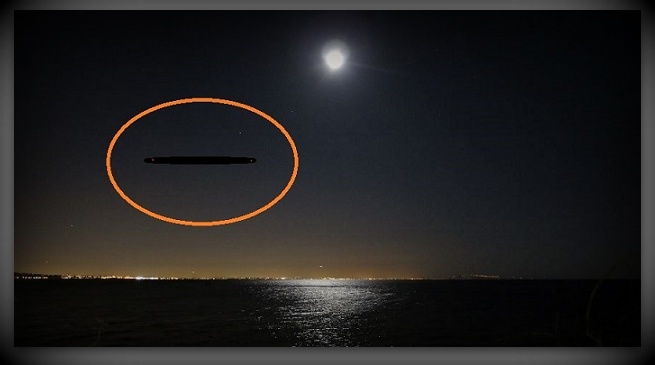 I was taking a late night walk on the beach at Tybee Island. I lived there for around 5 years. I walked down the main (public) part of the beach and then around the island onto some private properties, with private beach fronts. I used to go there sometimes in the middle of the night and sit in the grass under a few large trees, thinking about things and enjoying the serenity of the ocean at night. I know I was probably trespassing, but it was a private part of the beach and I liked to relax at night on the beach without the occasional person or flashlight of a vacationing late night beach goers. While laying in the grass on a lot elevated a bit above the shoreline, I noticed movement in the sky and saw a cigar shaped craft about maybe 1000-2000 feet in the air, about 1-3 miles away, flying towards the shore, but off in the distance. It made no noise and was a dull silver color, cigar shaped, maybe 20-40 feet in height and about 100 feet long. Since it was dark and only the moonlight was providing light, I could not make out any details of this craft, only that it was cigar shaped and obviously under intelligent control. When it got about a quarter mile away, the craft simply vanished. I was scared because I observed this craft flying in this flight path for about 2 minutes. Then, it was gone. My heart raced. As I was trying to process what had just happened, maybe 30 seconds to a minute later, I again saw movement in the sky and about 1-3 miles away, flying in about the same flight path, although slightly descending and ascending while on this path and moving a little from side to side. Descending and ascending maybe a few hundred feet and moving maybe 100 feet from side to side. Definitely not a completely straight flight path. Again, after the object had flown this flight path over the ocean and was about a quarter mile from the shore, it again vanished, only to appear about a minute later miles away, again flying a flight path similar to the last. Wether this was the same craft or multiple craft is unknown. They looked exactly the same, from what I could see in the dark, at 2am. I wanted this happen at least 10-15 times, over the course of 30-45 minutes. Then, the craft vanished as it had done before and never reappeared. I wanted about 10 minutes for it to reappear and it didn’t. I left the beach and never returned to that private area of the beach, although I did live on the island for another 2 years, visiting other areas of the public beach often. I had no other sightings during the time I lived there.
.
NOTE: The Tybee Island B-47 crash was an incident on February 5, 1958, in which the United States Air Force lost a 7,600-pound (3,400 kg) Mark 15 nuclear bomb in the waters off Tybee Island near Savannah, Georgia, United States. During a practice exercise, an F-86 fighter plane collided with the B-47 bomber carrying the bomb. To protect the aircrew from a possible detonation in the event of a crash, the bomb was jettisoned. Following several unsuccessful searches, the bomb was presumed lost somewhere in Wassaw Sound off the shores of Tybee Island. NOTE: The above image is a rendering.
.
KEN PFEIFER WORLD UFO PHOTOS AND NEWS
WWW.WORLDUFOPHOTOSANDNEWS.ORG
WWW.WORLDUFOPHOTOS.ORG
THANKS TO WWW.MUFON.COM
.
.
.