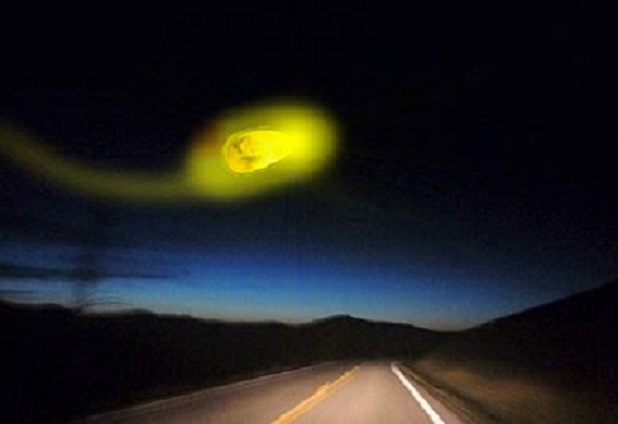 STRANGE UFO ORB INVESTIGATED IN HUTTO TEXAS
.
NOVEMBER 22, 2015   …………  HUTTO TEXAS
.
A witness from Hutto in Williamson County, Texas, has reported sighting an orb UFO flying close to the ground and emitting a green light. According to the witness, the UFO flew close to the ground and moved to and fro over a grassy area as if it was scanning the ground searching for something  According to the testimony filed as Case 72672 in the archives of the Mutual UFO Network (MUFON), the encounter with a mysterious orb UFO occurred at about 8:14 a.m. local time on November 22, 2015, as the witness was driving into Hutto.  The witness told MUFON that as she drove into Hutto she “noticed a weird green light close to the open grass area and pulled to the side.”  She watched as an orb UFO hovered over an open grass area, moving to and fro close to the ground as if scanning the ground below in search for something.  The mysterious silver-colored orb UFO had green lights and moved from side-to-side in the manner of a dog sniffing the ground in search for something, according to the witness. Then, suddenly, it turned off its green lights and zoomed off.  “   It went side-to-side and then just zoomed off. This thing was very close to landing. It was just searching for something in the grass,” she said. “I have never in my life seen something like this. It was silver, but the lights were green. Not too far from the grass.”  The witness was scared by the sighting, saying she had never seen anything like the orb UFO in her life. It moved over the ground for about 30 seconds after the witnessed pulled over to observe, and just before it zoomed off into the sky she had feared it was approaching her car.  “I was so scared. I thought it would come close to my car,” she told MUFON. “This is something I will never forget. It kept going side-to-side looking and this went on for 20 or 30 seconds and then it just turned off the light and zoomed away straight forward as fast as it could.”  MUFON reports that representatives of the organization in Texas are investigating the baffling case.  NOTE: The above image is a rendering.
.
KEN PFEIFER WORLD UFO PHOTOS AND NEWS
WWW.WORLDUFOPHOTOSANDNEWS.ORG
WWW.WORLDUFOPHOTOS.ORG
THANKS TO WWW.MUFON.COM CASE FILES
.
.
.