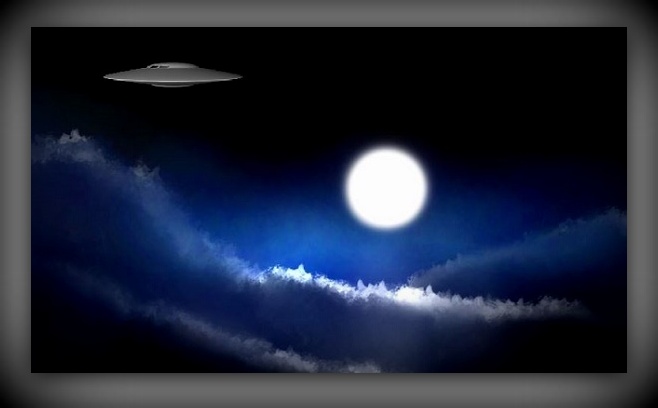 We live slightly up in the hills of Ashland about 10 minutes out of town, surrounded by trees. Both of my sons (ages 9 and 7) were outside camping in a tent they had setup on our deck facing East toward Grizzly Peak. This was the third night they had slept out there alone in a row.  Around 11:30pm they came running into the house, petrified. I was dozing off lightly on the couch on the north side of the house. Same level. My older son leads the way, his face is white and jaw is dropped. He’s stuttering for words telling me that a big disc flew down over their tent and around our house. I asked them to elaborate, and they both started telling me the story in tandem and in agreement, practically word for word: My older son was playing on a device when he saw a very bright pulsating light through the top of the tent near a small opening. He saw it, but didn’t care. He said moments later the light became so bright that he had to investigate.   When he got out of the tent and looked up he said directly over their tent was a very bright light pulsation from a craft. The light was alone and pulsating from an eye shaped hole. He stared at it confused and thought for a split moment that it was a helicopter or an air plane. He said it then started showing different lights all around its body, and he saw that it was a disc shape, and that it was much closer than he thought, just near the tree line.  He screamed for his brother to come see and shouted that it was a UFO. My younger son now begins telling the story: He said to my older son ‘yea right — your lying shut up’, my older son insisted and stuck his head in the tent and yelled at him to come up. The younger boy comes out of the tent and said that he saw the large disc shape object moving slowly now over their heads and down to the house, blinking multitudes of lights. Both boys are simultaneously speaking and using hang gestures to show me how the lights were moving around the spherical center of this disc. “So many” lights trailing everywhere. Multiple colors, blue red and yellow. Then, perfectly timed they both say “then boom! One huge light came from the center! Shining all over us!.” So bright it lit up the trees. They described the object as having a round dome on the top and bottom that the lights ran down. The the dome being bigger on top, with a bright light going around it horizontally. I was stunned at their reactions! This is extremely odd, especially for my older son who does not believe in anything other-worldly, and my younger son who seldom tells a lie. And never tells a lie without obviously displaying it with his body language. I asked them what the object looked like. They said it was “amazing”, “beautiful”, “like something they had never seen before ever”. My son described it as metallic and struggled to find words through his emotion. I ask him how big it was, and they both agreed it was at least the size of a bus, if not 2 buses. I asked them if they thought maybe it was a drone or quadcopter? My older son said it could have been but that it was huge. I suggested that if it were a drone and were large that it would be very loud. He immediately realized and told me that this object was completely silent but may have had a faint humming sound which came from it (my younger son did not comment on this, and only agreed! that it was extremely quiet). I began recording them immediately on my phone without them knowing so that I could replay it later. As they are telling me, my younger son sprinted back through the hallway to my baby daughter’s room (3 years old). Also on the north side of the house. When I yelled for him not to wake her up, he came back out and said he wanted to make sure she was still there in her bed because it had flown that way. Which I found heartwarming.

I continued to ask them what it did and why was it here they thought? My older son said he didn’t know, but that it was “pacifically, pacifically at our house and interested in us” (‘specifically’ he meant). They described again how this object became very active and moved down more into their field of view as if for them to watch. There is a clearing on the south side of the house that has no trees. Where they described seeing this object was not at all hindered by trees. It would have been completely clear of obstructions with the nights sky behind it. Using a lot of hand gestures they told me the disc started circling downward slowly on the south side of our house into the trees (the deck is on the east/south corner of the house). I asked them how low it was they thought and they adamantly said they could have thrown a rock at it and that it was very low. They then said in the same corkscrew fashion it went back up and directly over the top of our house, still displaying the multitudes of lights and colors. They said it went across our house slowly and headed towards our neighbors house (northward toward the side of the house I was sleeping on). They said it then rose above the tree line and started flying away. They knew I was on that side of the house and ran in to come tell me. At my feet there are very large windows and my younger son insisted that I must have saw it. When I said I hadn’t seen it they were shocked and disappointed. I asked them how long the ordeal took and my older son said at least 3 minutes. I asked them again if they thought it may have been a plane or some other sort of craft, and they both said it looked like something they had never seen ever, and my younger son insisted that he thought they were aliens and that he was very worried. My older son agreed and said he could not imagine it being from this planet, but that he was not scared just shaken. He told me how shocked he was that he would ever get the ! chance to see something like this in his life. Something that ! would ma ke him change his mind about UFOs and aliens existing.  I told them that I believed them, and that I believe it to be likely that there are other beings in and around this planet and that perhaps these beings seized an opportunity to touch the minds of 2 young boys. They were very relieved that I believed them and insisted I message and tell their mom. They also asked to sleep with me because they were too scared to go into their rooms. This is also very odd behavior for them. As was it for them to both agree on every aspect, and be so  worked up.  NOTE: The above image is a rendening.