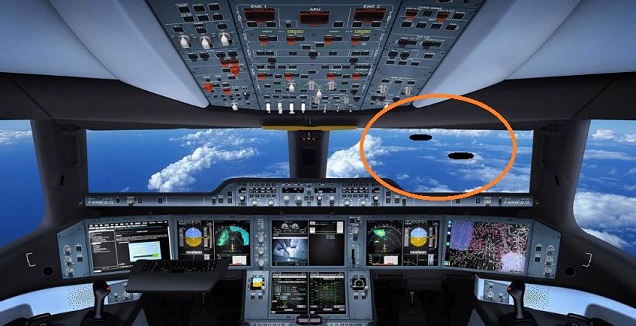 PILOT REPORTS ALIEN CRAFT TO OMAHA TRAFFIC CONTROL CENTER
.
MARCH 25, 2004   ………..  OMAHA NEBRASKA
.
Shape: Formation
Duration:20 min
.
I am an air traffic controller for Minneapolis Center. This evening at 1900 ((local/Central)) the pilot of an air carrier (heavy) that was under my control reported two flights of two aircraft. There were no other aircraft in the vicinity at the time. He said they were 15 miles in front of him at 35,000 feet traveling away from him in a westerly direction. The UFO’s stayed out in front of his aircraft for approximately 15 minutes until the pilot said that the UFO’s were so far out in front of him that he could hardly see them anymore. After being relieved of my duties I reported it to my supervisor who put me in contact of the Military Air Defense. The person at the other end of the phone said that they saw no objects in the area of this aircraft.  ((NUFORC Note: We have communicated multiple times with this witness, and FAA Air Traffic Controller, as well as with the Supervisor, mentioned above. They both confirm that no radar returns were visible on the Controller’s radar screen at the time of the incident.  The case has been forwarded to the National Aviation Reporting Center on Anomalous Phenomenon (<www.narcap.org), Executive Director, Mr. Ted Roe, and Chief Scientist, Dr. Richard Haines, Ph.D., former Senior Research Scientist at NASA’s Ames Research Center in San Jose, CA. The case is under active investigation, and audio and radar data will be requested from the FAA with a Freedom of Information Act request.  We express our sincere gratitude to the personnel in the FAA who saw to it that the information was forwarded to our Center!!  SPECIAL NOTE: NUFORC would very much like to speak with the crew members of the aircraft, and most of all, we would very much like to have them submit independent reports, using our Online Report Form, describing what they saw and what happened during their reported sighting. We guarantee that the anonymity of the witnesses will be protected. Thank you! PD))  NOTE: The above image is a rendering.
.
KEN PFEIFER WORLD UFO PHOTOS AND NEWS
WWW.WORLDUFOPHOTOSANDNEWS.ORG
WWW.WORLDUFOPHOTOS.ORG .
THANKS TO WWW.NUFORC.ORG
.
.
.