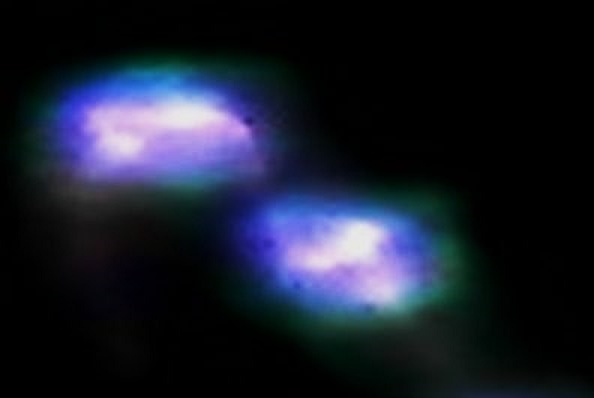 FORMER USAF MECHANIC’S ENCOUNTER WITH AN ALIEN CRAFT
.
NOVEMBER 7, 2015   …………..  WEST CARROLLTON OHIO
.
A witness from West Carrollton, in Montgomery County, Ohio, who claims to be a former USAF aircraft mechanic with more than 30 years of experience, has reported sighting and filming two mysterious, spinning and gem-shaped UFOs flying in a formation over his neighborhood.   According to the witness in a baffling report and video (see below) submitted to the Mutual UFO Network (MUFON) and filed as Case 72295, the incident occurred recently on November 7, 2015.  The witness was standing outside his home after dark smoking a cigarette when, at about 6:30 p.m., he noticed two mysterious and identical flying objects with lights rising slowly into the air. After the pair had risen above the tree line, they flew in a formation along a straight path from northwest to the southeast.  The UFOs had an identical gem shape and they appeared to spin in unison as they flew silently in formation across the evening sky.  “The two craft traveled a straight and level flight path from northwest to southeast,” said the witness, who has a military background, having served in the military as an aircraft mechanic for more than 30 years.  “They appeared to be a spinning gem shape, with no sound,” he continued. “Both were spinning in unison, and appeared to be flying in formation. Recon definitely came to mind.”  And despite his military background, his experience as an aircraft mechanic and considerable experience observing aircraft, the witness had no idea what the flying objects were.  He told MUFON that his experience in the military included four years as a mechanic at the USAF Edwards Air Force Base (AFB). During more than three decades with the USAF, he acquired an intimate knowledge and familiarity with USAF aircraft. He said he was certain that there was “absolutely” no regular USAF craft he has not encountered. But the twin crafts he saw flying over his home were entirely unknown to him both in design and manner of operation.
.
At the time of sighting, the witness lived about 15 minutes’ drive from Wright Patterson AFB where he regularly observed and identified aircraft taking off from the AFB and flying overhead.  Determined to obtain evidence of the sighting, the witness filmed the UFOs with the only video resource he had at the time, his cellphone.  “In the short video I managed to get on my phone, I tried zooming in and out a little to maintain focus. I didn’t have my reading glasses on,” the baffled aircraft mechanic told MUFON.  The UFOs flew at a cruise speed in a straight line without attempting any complex or unusual maneuvers. He watched the UFOs in puzzlement as they flew across the sky until they disappeared from sight.  The craft in front disappeared first, while the second remained visible for only a few seconds after. The witness was struck not only by the unusual shape of the flying objects, but also by the spinning behavior. The UFOs spun in unison, the witness said.  “You will note towards the end, as tree branches become visible, the lead craft disappears, the second one travels a little further, and then disappears as well,” he said in his report.  He continued, “One thing I noted was the spinning in unison. I do not have the means to enhance video, and would love to see what you can bring out in the video.”  The witness reported the sighing to MUFON on November 8, 2015, the day after the sighting. MUFON officials in Ohio investigated the sighting but were unable to determine the nature of the UFO.  Reported sightings of gem-shaped UFOs are rare indeed. But Mirror reported in September, 2015, the sighting of a mysterious diamond-shaped UFO over Merseyside in northwest England. The hovering UFO was filmed over the English town at about 4:45 a.m. It pulsated with light that grew brighter and bigger before it began fading. After it had faded to near invisibility it began growing brighter and bigger again.  NOTE: The above image is CGI.  Video image was of poor quality.
.
KEN PFEIFER WORLD UFO PHOTOS AND NEWS
WWW.WORLDUFOPHOTOS.ORG
WWW.WORLDUFOPHOTOSANDNEWS.ORG
THANKS TO WWW.UFOCASEBOOK.COM CASE FILES
.
.