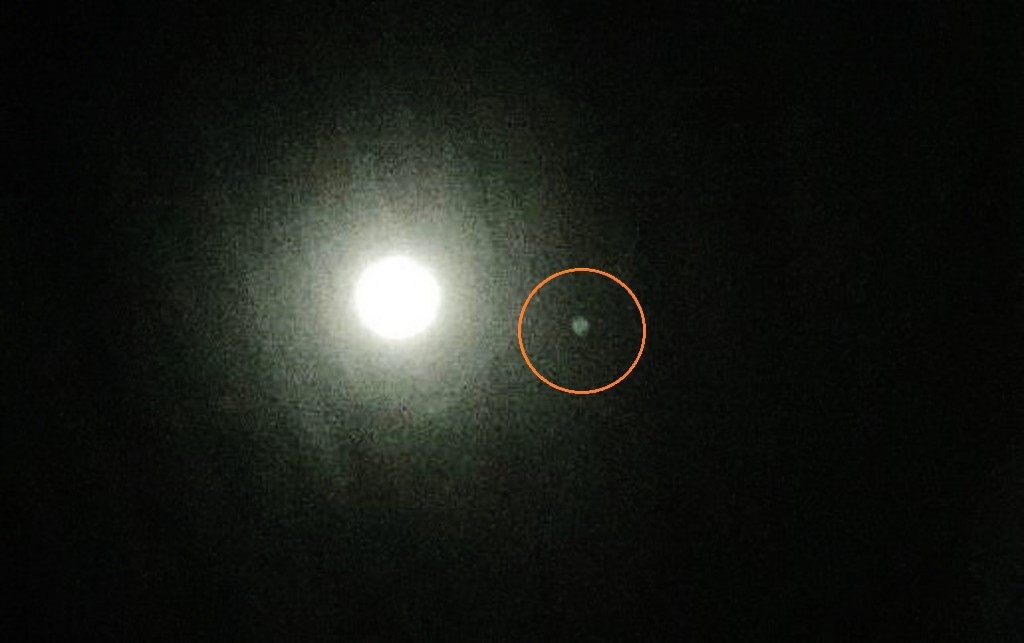 PHOTO’S OF  AN ALIEN CRAFT NEAR THE MOON
.
NOVEMBER 24, 2015    ……….  BATESBURG SOUTH CAROLINA
.
My wife and I were gazing at the moon which had a halo around it. We were talking on our front porch and just happened to see the beautiful halo around the moon. I don’t recall the exact time but it was around 9 – 9:45pm. I decided to try taking a picture using my iPhone 6 Plus with the flash disabled. I snapped several pictures and noticed a ball of light directly below the moon and it appeared as if it came out of or around the moon. As I snapped photos fairly rapidly the object dropped down, moved to the left of the moon slightly ( all of this from my perspective ), then slowly moved down and to the right and after a minute or less it moved upwards and to the right of the moon. If using a clock to demonstrate…..the object appeared at 6 o’clock, moved to the 8 o’clock position and after changing course counter clockwise finished its movement around 3 o’clock.

The only movement after it arrived at the 3 o’clock position was it moved away from the moon slightly, stopped and we observed it in that position for a period of time, I don’t know how long, it was difficult for either of us to look away from the direction of the moon. We sometime later, I don’t know how long exactly, went back inside our house. I came back out an hour or so later and the object was gone. The first photos I took only show the halo. All subsequent pictures show the object in different positions. None of the photos were altered in anyway, except one which I tried to zoom in on the object. My first thought was it must be a star … Until it changed direction. I served 6 years in the United States Marine Corps and I am a combat veteran. I have witnessed many lights in the sky at night and I was on the invasion force during the first Persian Gulf War. It wasn’t a flare, an aircraft, a shooting star or anything else I’ve witnessed before. Living in SC I know what the stealth aircraft out of North airbase look like….it did not appear to be anything military related. I honestly have no clue what it was.
.
KEN PFEIFR WORLD UFO PHOTOS AND NEWS
WWW.WORLDEUFOPHOTOSANDNEWS.ORG
WWW.WORLDUFOPHOTOS.ORG
THANKS TO WWW.MUFON.COM CASE FILES
.
.