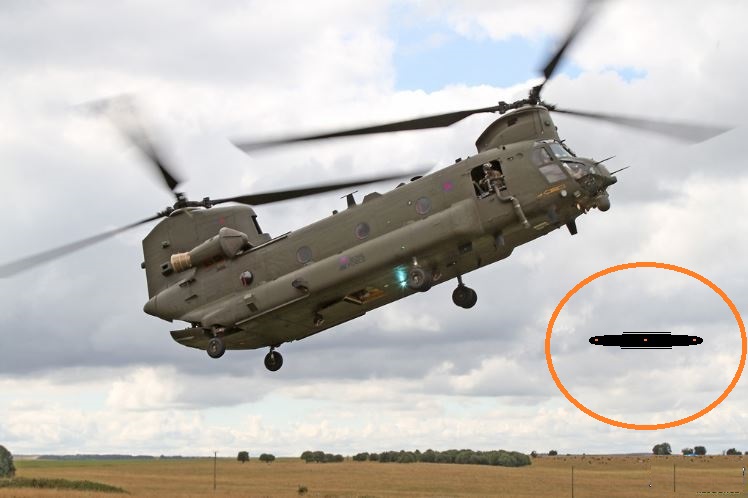 A military helicopter reportedly escorted a cigar-shaped UFO near to ground level, according to a witness at Battle Ground in Washington.  The incident that happened at 11:20 p.m. on March 21, 2016, was reported to MUFON the following day and can be accessed in Case 75344 from the organization’s witness reporting database.  The reporting witness was in the backyard and heard a sound of an incoming flying object, presumably a Chinook helicopter, nearby. It flew close to the ground as it passed into view. Ahead of it was an apparent dark moving craft, according to the witness.  Though the witness admitted that observing both was very short, he could make out a cigar shape of the UFO, which made no sound at all. It appeared to the witness that the helicopter flying close to it was an escort of the mysterious, silent aerial thing.  The witness thinks there has been UFO activity for many years in the area.  The witness claimed that he has prior reports from the place and also haven’t mentioned other unusual sightings in the area. He suggested that UFO watchers should visit Battle Ground, Washington.  Washington Assistant State Director Aleta DeBee investigated the case and closed it as unknown.  In her report, DeBee wrote that the UFO and military aircraft were about the same size, speed, and altitude – 2 to 300 feet off the ground. The known aerial object could be a Chinook helicopter as it had two props, DeBee added.  The UFO was in front of the chopper and not slung underneath, but moved as fast as the aircraft without making any sound and was not lighted. The investigator concluded that this was unknown but did not rule out the fact that this could be a military vehicle not known to her at this time.  NOTE: The above image is CGI.

1 thought on “MILITARY CHINOOKS AND ALIEN CRAFT IN WASHINGTON”