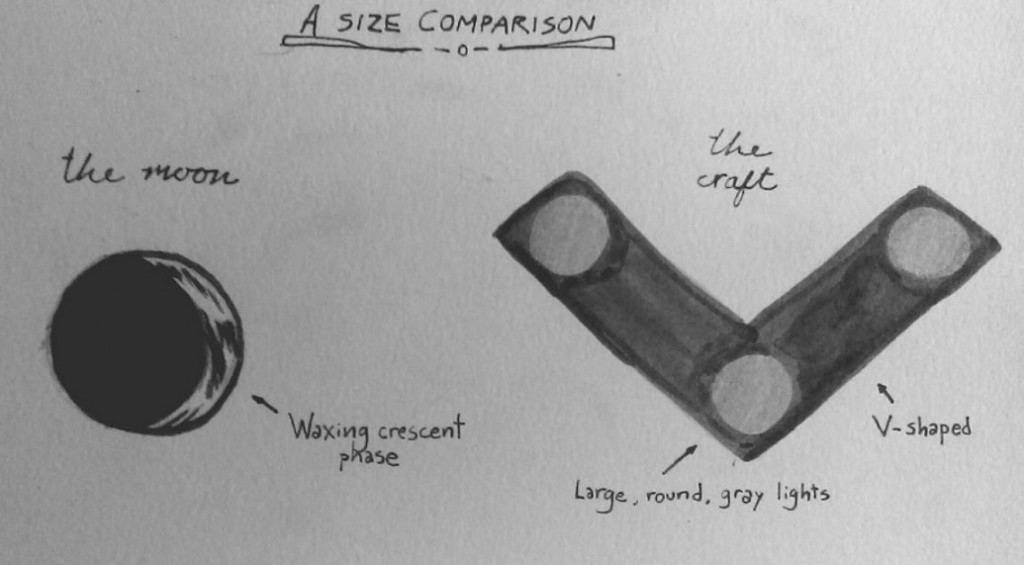 Description:  “I’d just stepped out of my friend’s house after a comedic session of Dungeons & Dragons.  We’d watched TV, talked about video games, the usual for our age group.  A normal Sunday night. I was the last one to leave. I didn’t expect to see something in the sky, but then again, I don’t think anyone does.  It was one of those rare cloudless nights where LA’s famous light pollution doesn’t ruin a decent view of the stars over the suburbs.  I’m originally from a very small town, so I don’t take celestial beauty for granted.  I looked up at the sky to admire the stars, and that’s when I saw it.  My first thought was “airplane”, but this was immediately replaced by “drone?” because it was too fast for a commercial flight, and completely silent.  And then I thought that it couldn’t have been a drone, because again, it was completely silent, and the most common drones are quadcopters.  This thing was in the shape of a chevron, and dark gray.  It was a little larger than the moon, which was slightly farther away.  Another thing that perplexed me besides the speed were the lights.   Three of them, one on each wing end and one under the middle corner, unblinking, and a dim gray.  I’ve never seen gray lights in my life.  The chevron was headed southeast, when suddenly, without slowing down, it made a sharp, tight U-turn, pivoted, and disappeared before my eyes.  I didn’t blink, I didn’t look away for a second, and there were no clouds for it to hide behind.  It was there, and then it was gone.  I don’t think we have the technology to make planes turn the way this thing did.”  NOTE: The above image is the witness drawing.