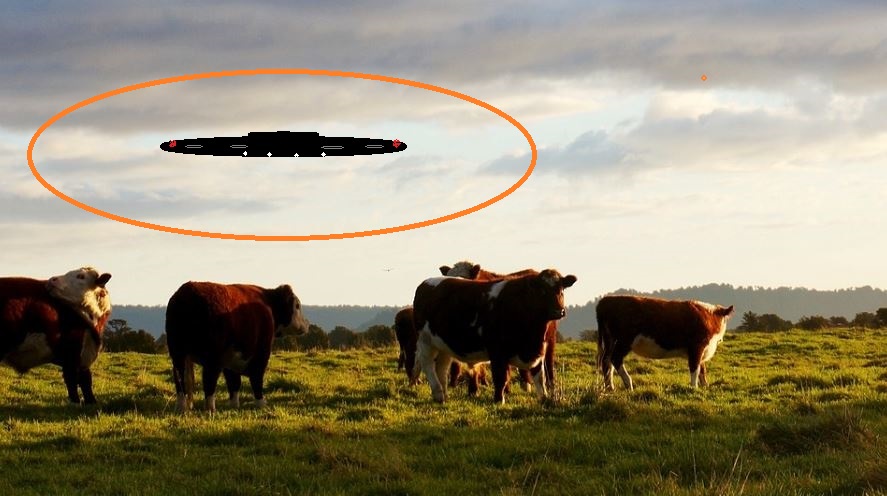 Mr. R.W.B., an executive of the Panhandle Eastern Pipe Line Company, writes about the experience he had at 2:20 AM on the 9th near Gower, Missouri: “I heard several cows bawl as though frightened or scared. I immediately jumped from my bed and ran to the picture window in my living room. It was a dark night but there was a distinct glow giving off considerable light immediately in front of the house (approximately 300 to 350 feet away). It made sufficient light for me to maneuver around a card table left in the middle of the room, and to see cattle in the pasture in a rough semi-circle to the left of the light glow. As my vision adjusted from darkness to this moderate light, I was able to see parts of what appeared to be .a tremendous circular object. The light was a yellowish-green and came from the concave sides of the craft. I could not tell whether it came from a translucent surface or was reflected from the base of the craft against a shiny surface and then back to the ground. “The object appeared to be at least 100 feet in diameter, and to be hovering 20 to 25 feet above the ground…There were definitely seven openings or portholes in the approximate center of the concave sides. I could not see distinctly enough to tell if they were square, rectangular, and oval or round. I would guess that they were two feet to 30 inches in approximate diameter. I saw no door or distinct opening.

I saw no living thing enter or depart the craft. Some of the cows were staring at this object from perhaps 100 to 200 feet away. Cows with younger calves were bawling, and some of the calves were answering. Finally one cow whirled and ran, with tail high, toward the barn. The other followed and in only a few seconds there were no cattle in sight. “The craft remained some little time after the cows departed, but I have no idea whether this was half a minute or considerably longer. All during this time there had been a distinct noise that I have difficulty in describing. It sounded something like the swish of a piece of wire which one might whirl around above his head at high speed and yet it had a pulsating rhythm of some kind. When the craft departed, this noise was two or three times louder and the sound-pulsations were more rapid. The craft moved away rapidly toward the southwest, arising at about a 45-degree angle, without the craft being tilted in any way from the horizontal-position it had maintained at, or above, ground level.” NOTE; The above image is CGI.

3 thoughts on “ALIEN CRAFT LOOKING FOR CATTLE IN MISSOURI”