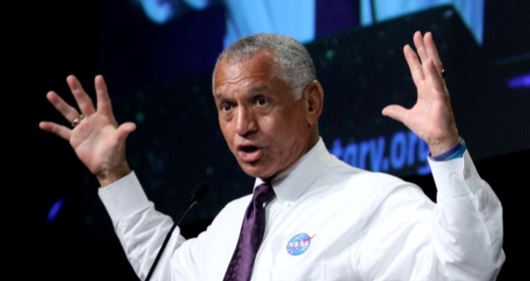 The highest-ranked official of the National Aeronautics and Space Administration (NASA), Charles Bolden, was put on sick leave for 6 months, after he publicly declared that an extraterrestrial invasion would take place before 2025.

A veteran of four space flights aboard the shuttles Columbia, Discovery and Atlantis, M. Bolden has logged over 680 hours in space, and is the administrator of NASA since 2009.  He shocked many  people during a conference in Houston on Saturday, by declaring that “it’s only a question of months, maybe years, before technologically advanced aliens invade our planet”.

“There are many scary things out there, and some of them have probably already taken notice of our existence.,” Mr Bolden said. “We have estimated that there are at least 30,000 other civilizations in the Universe. We’ve been active in outer space for decades, so we’ve certainly already attracted the attention of at least one of them. We could be invaded at any moment!”

The stunning declaration clearly caused a major discomfort in the crowd, and Mr Bolden was rapidly accompanied off the stage by two other NASA employees.  This is not the first time that a leader of NASA evokes the possibility of encountering extraterrestrial life, but it is the fist time that a leader of the organization openly speaks of the possibility of an alien invasion.  Many other members of NASA have publicly denounced Charles Bolden’s catastrophic prediction, saying it was only his personal opinion and not the official position the organization.  The Deputy Administrator of NASA, Dava Newman, tried to reassure the population by saying that NASA did not have any information suggesting that extraterrestrial life forms are getting ready to invade our planet.  Mr Bolden hasn’t spoken publicly since the event and has refused all demands for interviews.

171 thoughts on “NASA ADMINISRATOR CLAIMS THAT WE WILL BE INVADED”