Just after 11 pm on the evening of 10th September 1981, as she got out of the taxi that had brought her home, twenty-three-year-old Denise Bishop approached the back door to her mother’s house. She would notice a bright light from the corner of her eye, announcing something strange occurring behind her property.

As she focused her attention in the direction of the lights, a huge, dull metallic object “in the shape of a crab” filled her vision. She could recall no sound at all from the airborne craft as it hovered silently over the houses below it. From beneath the magnificent object were several columns of pale purple, pink and white lights.

Suddenly coming to her senses a little, Bishop would fumble with her keys in an attempt to open the door. As she put her hand on the handle and the key into the keyhole, a “lime-green pencil beam of light” shot out from the craft and “hit” her hand. As soon as it touched her, Denise lost the ability to move. She was essentially, frozen.

She would estimate later that this paralysis lasted probably no longer than thirty seconds. As soon as the beam was “switched off”, she instantly regained mobility over her limbs and in one fluid motion, continued to open the back door. Bishop would later describe the experience as if “the whole incident was a film that had been stopped and then continued!”

As she anxiously fumbled with the door and entered the house, the great ship would rise into the night sky and disappear. 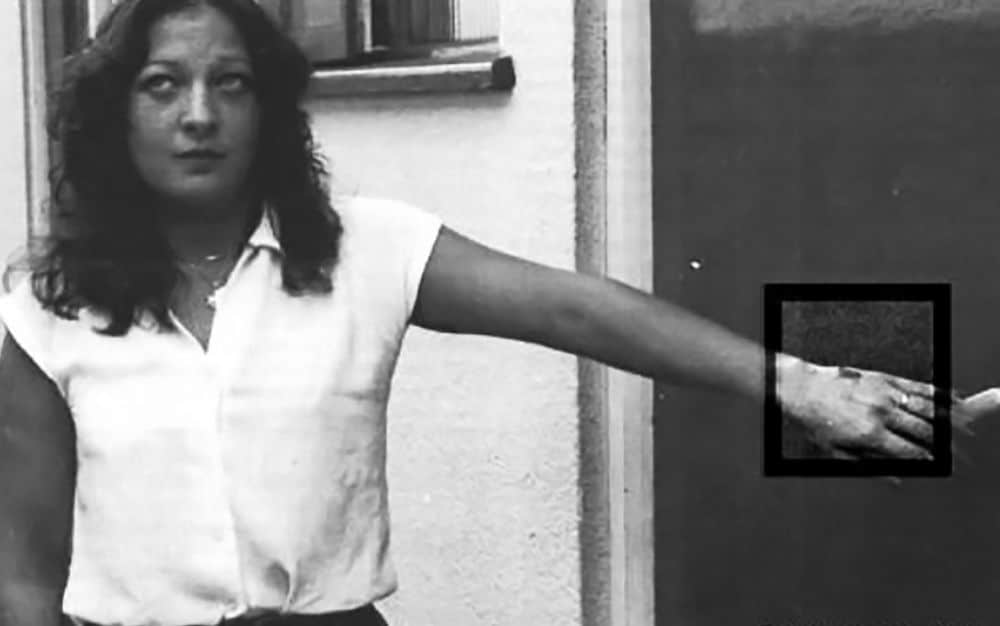 By the time she was inside the house and the craft had vanished, Denise’s sister came to see what the matter was. Denise informed her of her experience. It was while doing so that she noticed spots of blood on her hand. Closer examination revealed an intense burn that was now beginning to hurt immensely.

By the time the aforementioned Greenwood arrived home from his radio show, it was approaching 3 am. Seeing the burn on Denise’s hand, he would make the report of the encounter to the local police. It was then he would be put in touch with Boyd, who immediately set off to speak to Denise.

Although she would not agree to seek medical treatment for her hand, she did speak to Boyd in detail of the incident. Of the burn on her hand, he would note how it appeared “as if a patch of skin had been removed, exposing the new, shiny skin beneath!”

Because of the intense pain of her hand, they made attempts to run it under cold water. This, however, only seemed to make the pain even more intense. Antiseptic cream served to dampen it somewhat, but it would be several days before any significant improvement.

Boyd would return to speak with Denise the following morning. With him was a nurse, who inspected the wound on her hand. It had now turned significantly worse, and while she would allow the nurse to treat it and dress it, she again refused medical treatment. Some reports suggest that this was because of an upcoming trip to Canada, which she feared a doctor would not allow her to go on.

Photographs of the wound and the nurse’s notes would go to an anonymous consultant at a “leading London hospital!” It was their conclusion that the wound appeared to be the result of “an intense laser burn!”

The wound would eventually heal and scab over, but a scar remained in place. Denise would also report (to Boyd) how it would sometimes “feel hot and prickly” in the cold weather.

For her part, Denise wished the incident was forgotten. She would turn down multiple offers for television interviews, although she did grant one newspaper interview in October 1981 to a local journalist, Roger Malone, of the Plymouth Evening Herold.

There are many other cases of paralysis in UFO encounters, and more importantly to this article, reports of “green beams” of light that deliver it. Interestingly, although all those caught in these beams can’t move, nor speak, all report still being able to breathe.

This suggests the use of technology that renders the muscles of the limbs useless, while keeping intact and able, the cardiovascular system. As a side-note, while not discounting a connection to extraterrestrial involvement in these cases, perhaps it is worth noting alleged secret microwave and pulse technologies carried out by militaries and governments around the world. NOTE: The above image is CGI.