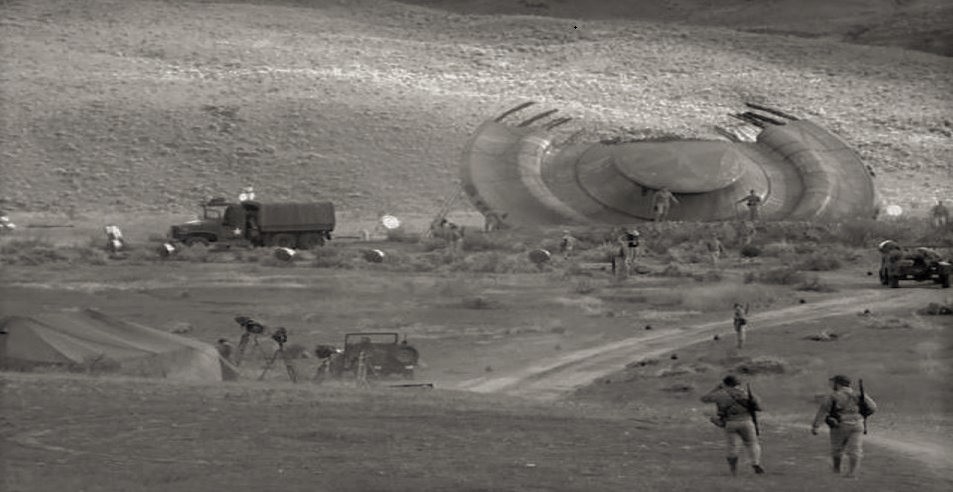 The area around the object was evidently so hot that “sand and rocks had fused together!” Radioactivity was also so high in the crash site, than many of the military’s electronic equipment failed to work.

A Dassault Mirage fighter jet – the type of military aircraft that was scrambled.

The strange craft was a “polished, smooth silver” material, seemingly hard, but with no visible seams anywhere. What appeared to be portholes were present on the craft – these were “unevenly” spaced. Also, what the military assumed was “landing gear” was visible. This suggested that the craft was attempting to land as opposed to falling from the sky out of control.

The retrieval team would force a hatch open, and two “crew” members removed from the craft – both still alive. Each dressed in “tight fitting grey suits”, with an estimated height of around 4-5 feet tall. Their heads were much larger than their bodies, and their eyes were equally out of proportion. The report basically describes what most people would call a “grey” alien.  Under the suits, their abdomens also had a ribbed, scaled appearance.

The craft safely retrieved and on its way to an unknown South African military base, with dirt and sand covering any evidence of the incident. From there, the object went on a “one-way passage to Wright-Patterson Air Force Base” in the United States.

Furthermore, while two of the aliens did indeed make the trip to Wright Patterson in America, a third alien – according to a source in the South African military – would stay at the base in South Africa, and was unknown to the Americans. Many reports state that a facility referred to as Camp 13 is the base in question. Incidentally, Camp 13 apparently resides near the Kalahari Desert. Whether or not the alien is still in South Africa’s possession, or is even still alive, remains unknown.

Nor is the fate of the two extra-terrestrials that would go to Wright-Patterson. Many whistle-blowers and deathbed confessions have claimed that alien bodies are in the US government’s possession – many of them deep-frozen.

104 thoughts on “ANOTHER ALIEN FOR WRIGHT-PATTERSON AIR FORCE BASE”