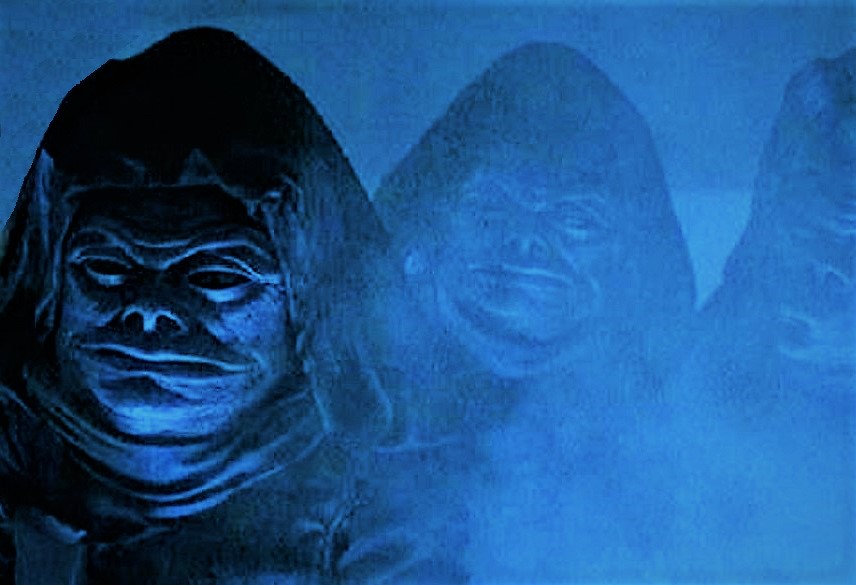 Vienna, Virginia – 2017-10-01: I sleep sitting partially up and I can see the door to the bedroom clearly. I awoke to a bright light under the door, originating in the hall beyond. The door opened and in walked several (I am not sure of the exact number) squat figures. They were silhouetted by a bright light in the hall. They were dark blue/grey with large, blocky heads and virtually no neck. Their faces were heavily furrowed. They stood 3 to 4 feet tall, and wore something that looked like monk robes that were very dark grey. When they entered the room, I became paralyzed. They stood around the bed, even on the other side where my wife was asleep. I tried to call out to her but I couldn’t make a sound due to the paralysis. I sleep with a CPAP machine (mask and air hose) for sleep apnea. One of the figures removed the mask from my face. Another pulled the covers back off of me. They raised their arms and I floated up out of the bed, lying flat now. I floated above their heads toward the door. As I began to float out the doorway, I lost consciousness.

The next thing I remember is floating above their heads back into the room toward the bed. I was angry, very angry, and with great effort I began to thrash about a little. For some reason they had difficulty controlling me through my anger. One of the figures on the far side of the bed next to my wife knocked something over on the dresser, but immediately righted it and put it back where it belonged. They regained control of me. They successfully floated me back into bed and pulled the covers back over me. They then retreated from the room. After they closed the door, the light went out and all was quiet.

I regained my senses and found myself lying in bed without my CPAP mask on. I looked at the clock and it was 5:53 am. I got up out of bed, feeling both frightened and angry at the same time. I got up out of bed and started my day. In the morning my wife said that she had been up 3 times to go to the bathroom during the night which is unusual for her. She usually only gets up once, and rarely remembers much about it.

I searched the internet and was not able to find any pictures or drawings that resembled the figures. Then I bought a reference book and found a drawing that is almost identical. I have attached that image to this report. (MUFON removed image) – MUFON

NOTE: If you’re familiar with the film ‘Communion,’ the description seems similar to the ‘blue men’ aliens. Lon   NOTE: The above image is CGI.