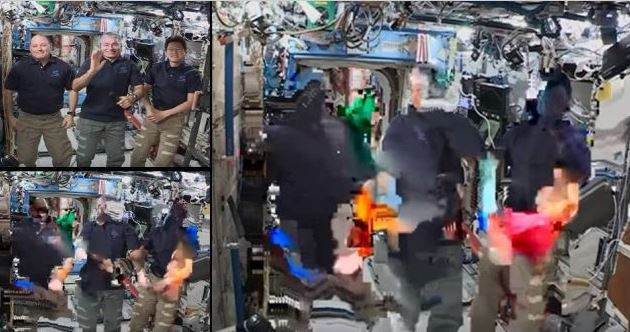 Aboard the International Space Station, Expedition 54 Flight Engineers Mark Vande Hei and Scott Tingle of NASA and Flight Engineer Norishige Kanai of the Japan Aerospace Exploration Agency (JAXA) discussed life and research on the complex during a pair of in-flight interviews Jan. 3 with KMSP-TV, Minneapolis and the Voice of America.

The interview which seems to be live gets a remarkable end, which starts at about 13.55 in the video what looks like a glitch in a Chroma Key Layer.

A chroma keying technique is commonly used in video production and post-production. So if it is really a glitch in a Chroma Key Layer, then it is not a live broadcast but a post-production, moreover if that should be the case then we may wonder whether the interview was recorded from an unknown location on Earth and edited by NASA?

If we look at a similar interview recorded in 2013 then it seems that certain “Live” interviews indeed happen from a location on earth instead directly “Live” from the ISS.

During that 2013 interview Chris Cassidy accidentally admits they are filming in the USA.

After an innocuous question from a student about his high school days Chris offers some unscripted information about where they are filming which makes the jovial space case seem pretty stressed out for a minute knowing he has said something truly stupid ( 0:56 ) “…Across the United States from where we are talking to you right…”

The technique has been used heavily in many fields to remove a background from the subject of a photo or video – particularly the news casting, motion picture and videogame industries. A color range in the foreground footage is made transparent, allowing separately filmed background footage or a static image to be inserted into the scene.

Is the ISS live stream feed really “Live” or is it fake and it is all a matter of post production and editing?

KENS NOTE: This would be the same way that NASA had the live broadcast of the Moon in 1969 rerouted from a desolate warehouse on Earth.  It would of been an easy way to fool the public and especially all of the workers at NASA and the Houston Space center thinking this event was really happening.