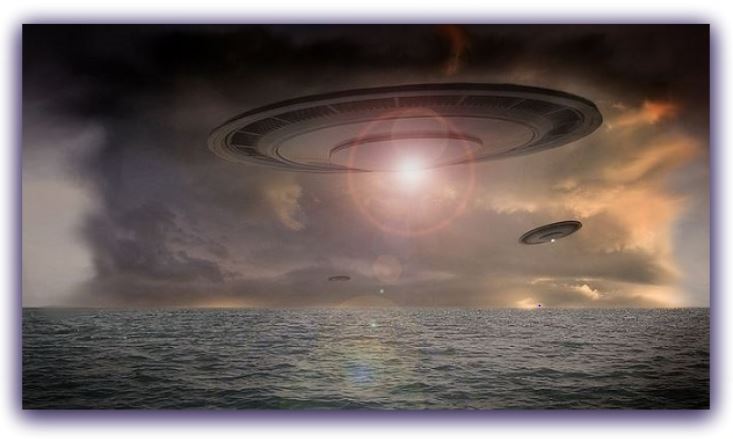 Below the UFO the water began to chum. Mist swirled into the air. A center plume of water shot up to the bottom of the UFO. It was a waterspout. The UFO moved slowly to the left.  Ten to fifteen seconds passed while I stared at this amazing scene. Suddenly the waterspout collapsed. The UFO angled off to the left, climbed at a sharp angle, and disappeared into the hazy sky.  For years witnesses have seen many types of UFOs cruising off the Palos Verdes Peninsula in Southern California. UFOs have actually been seen to come out of the water in the San Pedro Channel. In the early seventies, my friend Jim was on the boat returning from Santa Catalina Island to San Pedro Harbor when he spotted a low, flying disk cruise silently over the channel boat. The craft was so close he could make out every detail of its structure including the four hemispherical pods on its underside.  Strange blue-green lights have been seen in the water since 1989. In 1989, and again in 1990, witnesses have seen as many as 20 events an hour. One large light appeared to be as much as 100 feet in diameter. This large light spawned babies no larger than 10 to 12 feet in length. These lights were seen to move swiftly under the ocean’s surface some 500 to 1,000 feet from the coastline in Abalone Cove. The hypothesis that these may be luminescent fish is discounted by a local marine biologist. These lights were too large and too swift to be fish. One of the lights was reported to have emerged from the water. Large numbers of dead fish are often noticed after the UFO is seen diving into or emerging from the water causing speculation that the propulsion system using high energy electrical systems kills the fish.

On one occasion on February 19, 1982, on Lake Lacar, Argentina a UFO had plunged into the lake and shortly thereafter a large number of dead fish were observed. The dead fish were sent to a laboratory and the fish’s air bladder systems had been compressed by a shock wave. The rapid movement of the UFO may have been to blame.  In 1992 a sea kayaker viewed an amazing sight off the Palos Verdes Peninsula. He was four or five miles south of Los Angeles when a waterspout suddenly formed some hundreds of yards ahead of his kayak. As he observed this spout, the forward motion of the funnel stopped, the curtain of light mist surrounding the waterspout disappeared and a rotating column of what seemed to be solid ice appeared. As the sun reflected off the rotating mass of ice crystals, it appeared to be a sight of extraordinary beauty. The height of the ice column was estimated at 100 to 150 feet. When the ice column collapsed back into the ocean, it created a whirlpool. After this amazing event, the kayaker paddled over to examine floating fragments of ice and found specimens of fish embedded in the frozen pieces.  NOTE: The above image is CGI.