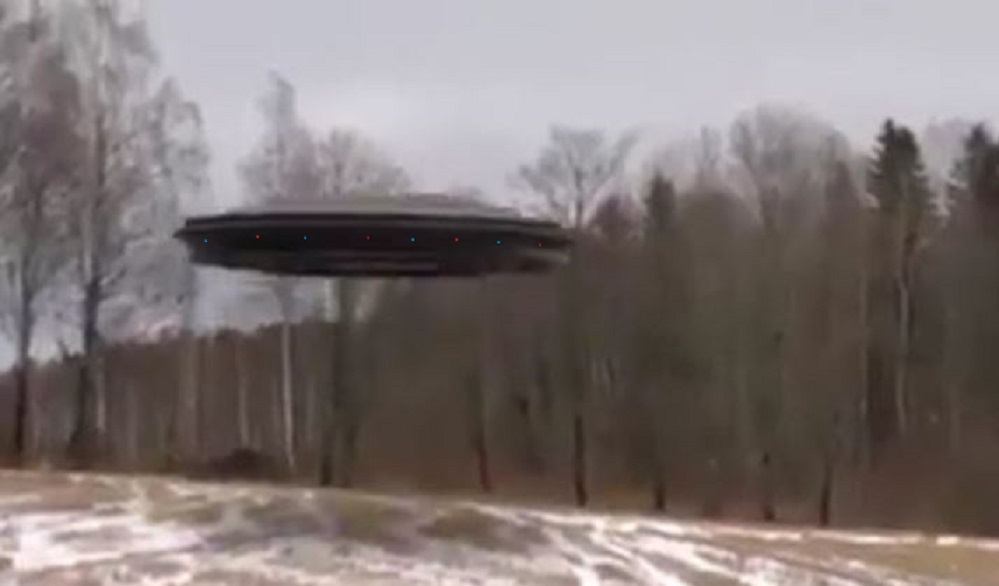 . One fall evening (between 1980 and 1983) I was watching TV down stairs when the dogs started barking loudly. I opened the sliding glass door and yelled to the dogs to be quite. They were very well trained and normally would obey my commands. However they kept barking totally ignoring me. I thought, well must be a coyote, skunk, raccoon or something bothering them. So I went outside to identify the problem. To get to the kennels I needed to walk up a set of stairs because the kennel runs and exercise run were on a hill. Our home was built on a hill. As I walked up the stairs I saw a round / disc shaped UFO about 25 to 35 feet off the ground. The craft covered the whole exercise area so it was at least 50 feet in diameter. It was probably 25- to 35 feet deep. There were several layers of lights and windows around the center. I observed it for a few seconds and then it shot off towards the west right over my neighbor’s house at a speed that left a blur of colors behind it. All without making a sound or causing any movement of air. When my wife arrived home that evening I shared my experience. She of course was in disbelief. I drew her a sketch of what I saw. I knew I had no proof so I let it go. Well, one or two days later the Elbert County News was delivered to our home. Lo and behold on the front page was a drawing that was almost identical to my. Proof! At least to my wife. The article in the paper went on to describe the family next door that witnessed this UFO and reported it. The high school / grade school girls of the family were apparently sitting in their kitchen and were watching the UFO out their kitchen window hovering over my property. That is when they drew their sketch of the craft. As I was walking up the stairs to check on my dogs their parents were returning from some function in town. Our little subdivision was in a vale so their parents were coming down rolling hills on the road that goes past a dairy farm. As they approached the top of the hill where our homes are visible below they saw the UFO over my property and then they saw it suddenly take off to the west just as I described it to my wife.

This occurrence has been on my mind for almost 40 years. It is frustrating because I have no proof. In hindsight I wish I would have spoken up at the time but I was too uncertain of the possible ramifications. A couple of years ago in an effort to help ease my mind, Jan, my fiancée, and I went to the library to find the issue of the Elbert County News with that front page article. I discovered that the Douglas County library had the original newspapers in their storage. I called ahead and asked them to pull the Elbert County News from 1980 through 1983. When I arrived at the library they said they forgot to bring over the issues from 1980. I checked the issues from 1981 through 1983 with no success. My life is quite busy and I did not get back to them about the 1980 issues. This past month I told myself I really need to look at the 1980 issues. I called them and they said that all of the Elbert County News issues were given to the Elbert County Library district. I learned that the Elizabeth Library has all of the Elbert County News issues in their possession. I spoke to Lisa at the Elizabeth Library who said if I come in and ask for Wendy she would bring the issues to me to look at and copy. I went there this past Friday afternoon. Jan and I went to the Elizabeth Public Library this past Friday afternoon and asked Wendy for all of the 1980 issues. Well she could only find the Christmas week issue of December, 1980. She had issues going back to 1966 and issues up through 1979 and from January, 1981 on. Yep, January through the third week of December, 1980 were missing. I know I am not imagining all of this. A couple of months ago, somebody brought up the Elizabeth UFO sighting that I am referring to my former wife (we have remained good friends). She had no idea why. It just popped up in conversation at a party. She was amazed that anybody but us would know about it or even remember it. The bottom line is I am hoping that you may have something in your records about this incident. It would be just me for my own interest. It will not prove a thing but I may feel better about the whole experience.  NOTE:  The above image is CGI.