Soviet Moon ProbeIt’s hard to believe that next year will mark the fiftieth anniversary for humankind’s taking of its first steps on the Moon, the nearest celestial body to the Earth. Just three years before the historic Moon landing of the American Apollo 11 landing vehicle, space scientists the world over were still trying to figure out what the lunar surface was largely composed of.Patriotic contactees like George Adamski and Howard Menger, who had been to the Moon courtesy of the Venusians, told personnel of the National Aeronautics and Space Administration (NASA) working on the proposed Moon shot that our astronauts would have nothing to fear in that regard, that they would find a hard and safe surface to walk on.Perhaps the NASA scientists and technicians working on the Apollo program already knew about the lunar surface conditions; but they didn’t want to share that information with the Soviet scientists. After all, we Americans were in a race against time with the Soviets to put the first astronauts on the Moon and return them safely to Earth. If the Soviets wanted to know about the lunar surface, the head honchos at NASA probably decided it would be better if they wasted their own time and money to figure it all out. Why cut them any slack, and give them a leg up on us in the ongoing space race?Just one month into 1966, the Soviet Union did just that. On 31 January the Soviet space program successfully launched their Luna 9 probe. It “soft landed” on the Moon on 3 February by employing its powerful retro-thrust braking rockets to set the 3,200 pound craft gently down. Of course, the Soviets amazed the entire world with this landing. Americans were beginning to wonder if NASA was going to maintain fidelity with the late president John F. Kennedy’s stated ambition for the United States of America to put the first astronauts on the Moon.With the Luna 9, it was clear that the Soviets had taken a significant leap ahead of us in the space race. What was even more impressive was that the Luna 9 probe, after landing without any problems, was able to deploy a television camera and send live photos from the surface of the Moon. One of the biggest discoveries about the Moon revealed by this television transmission was the firm ground that the spacecraft touched down upon. This literally served to explode the famous theory of a dust-covered lunar surface in which any space vehicles would simply sink out of sight (Otto Binder, “Our Space Age” syndicated panels, 28 and 30 March 1966, Bell-McClure Syndicate, Paterson News, New Jersey). 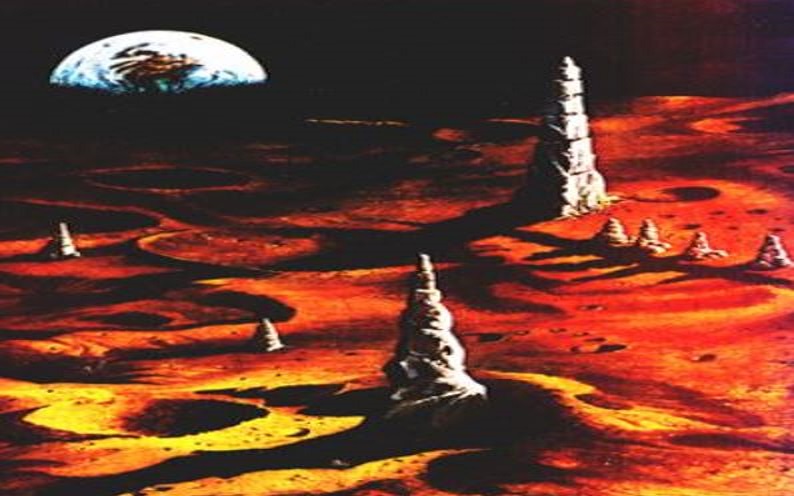 Lunar “Pyramids” and “Spikes”It became more than obvious that if the American populace and taxpayers were going to continue to stand behind NASA’s efforts to land astronauts on the Moon, that something should be done to at least catch up with, and maybe outdo, the Soviet Union’s great accomplishment in landing the Luna 9 on the Moon’s surface. The big breakthrough was revealed on Tuesday, 22 November 1966, when scientists at the Jet Propulsion Laboratory (JPL) in Pasadena, California, declared that their own Lunar Orbiter 2 had taken photographs of what appeared to be “pyramids on the Moon,” along with other “spike-like objects or obelisks that bore a remarkable resemblance to the Washington Monument.”

A spokesperson for the JPL announced that, “Unusual mounds that appear like tall, skinny pyramids” turned up in one of the photographs among the first batches of the Lunar Orbiter 2 photographs. The photograph with the pyramids was enlarged five times and showed an area of about 750-by-550 feet. It represented the fourth of 13 potential landing sites for American astronauts slotted for exploring the lunar surface. The unique photograph was forwarded to NASA by the JPL. A spokesman for NASA noted that the area in question had about “six protuberances with the largest appearing to be about 50 feet wide at the base and 40-to-75 feet high.” The spokesman added that, “Some of the smaller ones look like upside down ice cream cones. I’ve never seen anything like it before.”

By way of explanation, the NASA spokesman declared that, “At the same time that the Orbiter 2 was photographing the area, the Sun was about 11 degrees above the lunar horizon during the sunrise phase of the Moon’s two-week long ‘day.’ This accounts for the long shadows,” the spokesman asserted, hoping that his conjecture would suffice for the members of the press corps present for his Lunar Orbiter 2 mission briefing.

The spokesman rambled on: “The striking shadow-casting protuberances are naturally occurring features on the lunar surface. They looked indigenous to the Moon and are spaced at random.” He also stated that a “determination of the precise height of the protuberances would only be possible after ground slope measurements had been made,” additionally noting that, “Some of the smaller protuberances in the cratered upland basin in the area called the Sea of Tranquility appeared weather beaten and rounded.”

The source for this information was a United Press International (UPI) report dated 22 November 1966, as published in the Wednesday, 23 November 1966 edition of the Philadelphia, Pennsylvania, Inquirer newspaper. Remember, this was almost three years before the launch of the Apollo 11 mission, whose destination was ultimately designated as the Sea of Tranquility, the location of these strange lunar protuberances and domes. Clearly, NASA officials were desirous to find out the true nature of these structures. It is doubtful they accepted the first premise offered of them being something “indigenous” to the Moon and spaced at random” insofar as the true height of each object could not be determined. Some of the objects were also purely conical in shape while others resembled obelisks. These are not naturally occurring shapes.

Some kind of fervent activity appeared to be taking place on the Moon. It might signal extraterrestrial construction on our own supposed “natural” satellite. Keep reading this site for Dr. Raymond Keller’s The Moon Is a Venusian Colony, Part II, where the “Cosmic Ray” reveals other unique lunar phenomena and demonstrates how the strange protuberances on the Moon actually stumped all of the JPL and NASA’s so-called lunar “experts.” Learn what key figures in the international ufology community were saying as NASA was preparing to launch the Apollo 11 and American astronauts would walk on the surface of the Moon. You can be sure our explorers were not alone up there.

KENS NOTE: I feel we did not have the technology to land a man on the moon.  I feel that even today we do not have the technology.   Too many dangerous hurdles to jump over.  Van Allen Belt and the extreme space temperatures are just a couple of many.  Apparently the Russians were far ahead of us in the space race.  Why didn’t the Russians beat us to the moon ??  The Russians finally realized that it was impossible to do it…..simple as that……