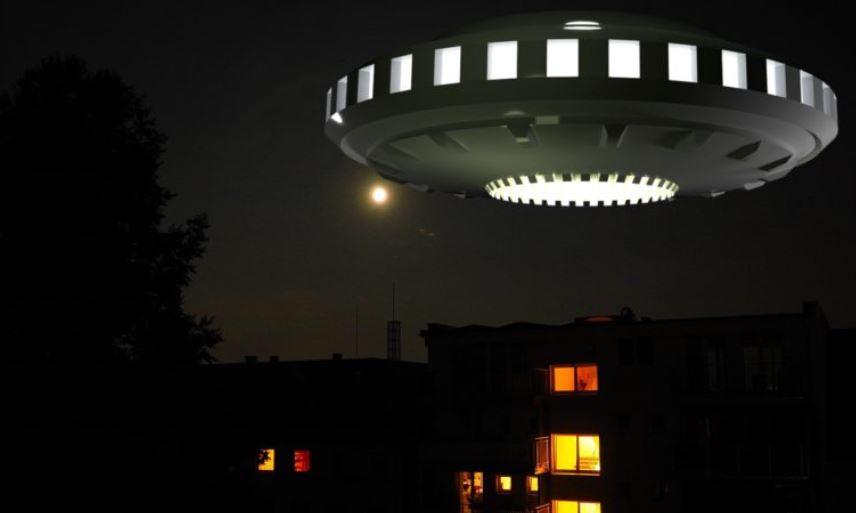 Broadview Heights, Ohio, just outside Cleveland, was a sighting of a similar disc-shaped object. The witness, who was only a child at the time, wouldn’t report the sighting until 2006, thirty years after the incident. Because of this, they are not sure of the exact time, only it was just before a major holiday, likely Thanksgiving or Christmas. With that in mind, then, the incident likely took place between late-November and late-December 1976.  It wasn’t uncommon for the witness to wake in the middle of the night, feeling a little scared, and then climb into bed with their parents. That is what had happened this particular evening. It was late, and while his parents remained asleep, he stared out of their bedroom window in the two-story apartment complex in which they lived. As he was looking out of the upstairs window in his parent’s room a “metallic saucer shape” came into view. It made no noise whatsoever and moved slowly and calmly. Much like Howard would describe the object approaching his train cab, the witness would remember that its pace “was that of someone walking”.  He would estimate the object to be around thirty feet across and moving at a distance of around thirty feet from the ground. He would further estimate the object to be around thirty feet from his location. There were other apartment blocks within the complex, each housing ten separate families, one of which was directly opposite the witness. Whether anyone from these other apartments witnessed the craft is unknown.

Absolute Certainty Of The Incident!

The witness would recall that the exterior of the craft was “a rough polished metal” of a bronze-silver color. While the top of the craft was an oval shape, the underside was completely flat. Except, that is, for the middle section which would invert inwards in a cone-shape.  The witness remained at the window, contemplating waking his parents. However, he didn’t want to take his eyes from the object even for a second. It continued on slowly over the complex, just above the trees, and over the parking area. It would continue in the same direction and simply vanished into the distance. He would remain at the window in case it returned. Or in case another mysterious vehicle arrived. However, nothing else of significance took place.  The witness would keep the incident to himself, aside from telling his cousins on one occasion during a family holiday. They would mock him mercilessly and so he never mentioned it publicly again. He was, though, absolutely certain of what he witnessed. And despite wondering if he might have witnessed a low-flying aircraft or even some bizarre trick of the light, his memory of the streetlamps reflecting so brilliantly off the surface of the craft, allowing him to see the details of it, simply cements the incident as authentic in his mind.  Check out the video below. It features audio from a radio station broadcast in Ohio. On this particular evening, they would receive several reports of a UFO from listeners.  NOTE: The above image is CGI.