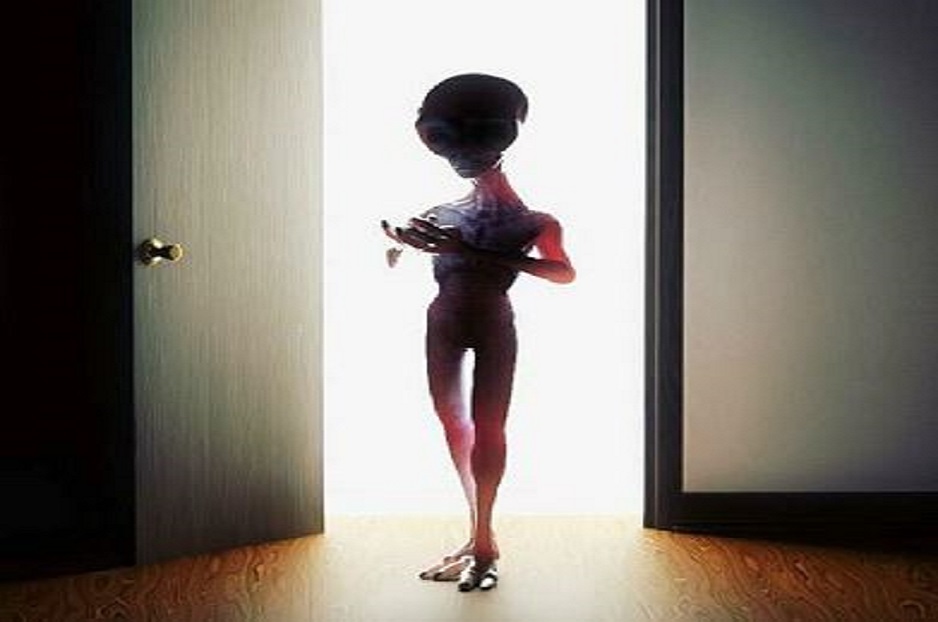 A woman in Janesville, Wisconsin recently contacted the Singular Fortean Society to report an encounter with “a grey thing with big black eyes” that occurred in her home during the spring of 2018.  The then 21-year-old woman had fallen asleep on the couch in her living room when she was awoken in the middle of the night by a bright light.  “I was woken up suddenly in the middle of the night from a very bright light shining through a small narrow window on the [front] door,” she said.  The couch on which she had fallen asleep faces the front door, but the door itself is blocked from view by a wall. Anyone entering the home through the front door would need to turn immediately to their right and go around the wall to enter the living room.  “I had a roommate at the time so I thought maybe it was her,” the witness said. “As I stood up and slowly walked to the door, another thought came to my mind. What if it was a burglar?”  “I walked up to the door and suddenly, I was face to face with a grey thing with big black eyes standing there,” she continued. “It honestly looked like your typical idea of what an alien would look like. It was slightly shorter than me, and I’m between 5’5″ and 5’6″.”  The witness screamed at the otherworldly intruder, and it shrieked back at her, its scream strange and birdlike.  “I screamed and it screamed back at me as if it didn’t expect me to be there,” she said. “I ran towards the kitchen and turned around towards my sister’s bedroom.”  It was then that she was struck by some sort of magnetic energy.  “It is very hard to describe,” she explained. “Almost like electricity? Vibration? I was paralyzed. The entire room was lit up with that bright light and I was being pulled back to the couch.”  She went on to describe the feeling caused by the energy as a “magnetic, tingling sensation,” and said the light was bluish white in color.  Stuck in the magnetic energy’s hold, the witness was pulled backwards towards the couch; her eyes closed in terror.  “I was floating,” she said. “I was levitated above the couch I was originally sleeping in, and as soon as my body hit the couch, I ‘woke up.’

The living room was still as if nothing happened.”  But the witness doesn’t believe this was any dream.  “The entire time I was floating I told myself ‘They’re going to make you think this is a dream. They’re going to make you think this didn’t happen. It did happen. Don’t forget,” she emphasized.  She remembers her body bouncing off the couch as she was dropped unceremoniously onto it, and how she could feel its particular lumps press into her back as she landed. After she was returned to the couch she opened her eyes to find that the living room “was still as if nothing happened.”  The witness does not recall any gaps in memory or missing time during the event, nor did she find any out of place marks on her body afterward; although, admittedly, she did not specifically check for them.  Despite her surety she is still reluctant to discuss her experience.  “Everyone can just shrug it off as if it was just a dream,” she said. “But I strongly feel that It was real. The fact that my initial reaction of someone coming inside was rational. The fact that I kept repeating to myself that this is real, it is happening, before I was brought back to the couch. It all seems and feels so real to me.”  The witness explained that opening her eyes didn’t feel like waking up in the traditional sense of a groggy return to awareness, but, rather, saying that she “woke up” was the best way to describe the return from paralysis, and she was otherwise continuously aware of her situation and surroundings.  “I think what I said is what happened,” she added. “I truly believe it happened.”  If you enjoyed this article and would like to support the Singular Fortean Society, please consider becoming an official member by signing up through our Patreon page membership includes a ton of extra content and behind-the-scenes access to the Society’s inner workings. NOTE: The above image is CGI.