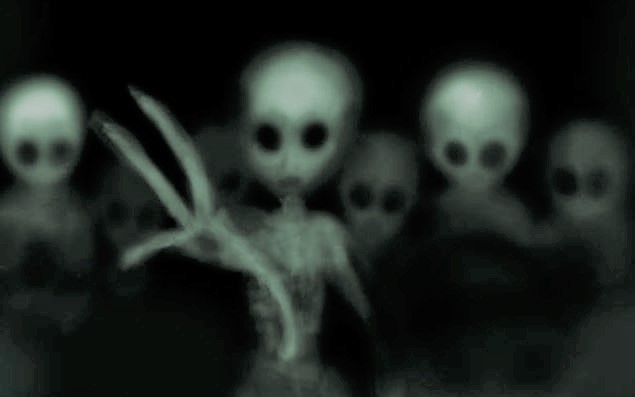 2006 (the first abduction) Adrian, 14, was staying at his father’s girlfriend’s house which was located outside of a small town in what I assume was Mandan, North Dakota (he mentions the waterpark at one point). His dad and the girlfriend had gone out for the evening. Adrian was staying there with her son, Alex, 12. They got along quite well.

At around 11:00 or 12:00 that night, Adrian had gone upstairs to use the bathroom. He was staying in the basement at the time and the toilet down there was broken. As he exited the bathroom, he saw something on the back deck, a figure that walked to the left. He went outside to investigate but saw nothing at first. Suddenly, the motion detector light went on. He saw a shadow on the grass coming towards him and he quickly tried to re-enter the house. Then he saw a flash of light “like a camera going off” and felt the sensation of pins and needles throughout his body. He came to walking down a dimly lit hallway. He could only move his eyes but not his head. Out of the corner of his eyes, he saw two 5-foot tall Greys on either side of. He then heard a voice in his head. “Everything will be fine if you co-operate with us”. It was telepathic. He noted that the voice sounded deep and authoritative, like a school principal. It was stern but sympathetic. With that, he began to feel at ease, as if they had done something to him to make him relax.

He was lead into a room, “like a doctor’s office.” There were two steel tables in the center. Another table was beside it with instruments. Alex was on a table naked. He was staring up at the ceiling, eyes open but not moving. Adrian thought he was dead. Adrian was then undressed and a group of beings began scraping him with a tool. They took samples, blood, semen etc. At one point, an object came out of ceiling and shined a blue light down on him. It was like an X-ray and Adrian claims he could see his torso innards. Adrian was so scared that he kept his eyes closed.

When the exam ended, Adrian regained control of his body. They took him into a room where 6 or 7 Greys were. There was one tall one, standing about 6 or 7 feet tall, who spoke to him. “Adrian, you have been selected. Your selection will not last very long,” he told him. A Grey entered and gave him his clothes. Alex next came into the room with the beings and Adrian and Alex got dressed. “You boys are okay, everything will be fine,” Adrian heard in his head. Then there was a flash of light and then they woke up the next morning in bed. Adrian noted that he had marks on his body.

Alex and him discussed the experience. Alex was truly terrified by what happened and still does not like to discuss it. He claims that he was sleeping and heard a noise. He woke up on a table with beings removing his clothes. He said he felt a pain in his arm. His next memory was waking up bed. Adrian noted that the smaller Greys were more robotic and emotionless while the taller one seemed more fluid in his motions and almost sympathetic.

2011 (the second abduction) In 2011 during his first year of college, Adrian claims he had gone to visit his father. One night he woke up and went to get a glass of water. He felt compelled to go outside and saw a light emanating from grandfather’s fish house. It was a red light that got bigger. Just then there was a flash of light. He came to walking down the same hallway. Two Greys on either side. They went into the doctor’s room and, unlike last time, Adrian had control and began undressing. This time, he noted that the exam was much longer and more thorough. They put something over his mouth. “Something crawled down and then back out,” Adrian recalled. “It had a musty sweet taste.”

When they were done, Adrian got up and got dressed. The taller Grey from before was there and he spoke to Adrian, telling him that Humans have not come very far in our advancement and that there are other civilizations that are much more advanced than us. The being told Adrian that politics and religion are holding us back. He also told Adrian that there are other races of beings out there and that some are friendly and some are not.

Adrian noted other experiences, including observing a light moving erratically outside his window in 2004. The light disappeared. Another time, in 2001, he was laying in his bed with the covers over his head and suddenly the room lit up like somebody turned the light on. He wonders if these two events were somehow connected to his later experiences.  NOTE: The above image is CGI.