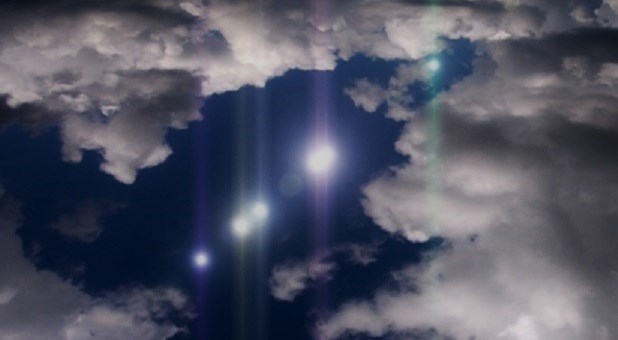 On July 30, 2011 at around 11:30 pm I witnessed something extraordinary while camping on Lake Erie with my family at the Knight’s Beach Resort in Haldimand, Ontario. Just above the trees which are about 30 feet high we observed 3 circular object that looked like fire balls. When I first caught a glimpse of them I panicked thinking that it was fire spreading from tree to tree but quickly realized that this was not fire at all. Instantly I knew that this was something very special. I had this overwhelming feeling of happiness because I always believed that there were extraterrestrials and other dimensions but never thought that in my lifetime I would experience anything that would indicate to me that in fact that was the case, until that very moment. That moment changed my life. I can tell you for certain that this was not anything “earthly”. These spheres/orbs glided over our campground occasionally slowing down and pausing. We all felt like we were being watched. As they started to move away from the camp my brother in law and I ran after them in hope that we would see something more. We were both afraid but just could not resist the urge to find out more. We quickly lost sight of them as they started to disappear behind the trees and we decided to run down to the beech to see if we could get a better look. By the time we got there they were gone. However, there were at least a dozen of people at the beech who just witnessed the same thing. We were told by several witnesses that there was a very bright shooting star in the sky which stopped suddenly and after a few moments broke into 3 lights. The lights flickered in different colours as if they were signalling each other. They then flew towards the shore of Lake Erie and appeared orange and red in colour. As they glided over the campground they paused and flickered again before taking off at a very high speed.
What is even more interesting is that when we returned home, Burlington Ontario, we overheard conversations between the locals about these fireballs over Lake Ontario. Apperantly these things were seen all overt the place. While I was shopping at a local grocery store I overheard a conversation between two older woman talking about watching these fireballs from their building balconies on lakeshore diving into Lake Ontario. They also commented that the fire departments were flooded with calls about fire balls. I thought I was in a middle of some kind of a cheesy 80’s TV movie. I mean how bizarre is this?! I myself have never seen them in Burlington but we did wonder why the fire trucks were constantly rushing through the city. It is not common to hear fire trucks very frequently in this city. Immediately I started googling about this and looking in the local papers for any stories and to my surprise found absolutely nothing. How can there be NOTHING?! I later found a submission in the Spectator by a man whose daughters witnessed these orbs but he was basically ridiculed. People commented that they were Chinese lanterns, but I can tell you I know what a Chinese lantern looks like because I have seen them before and this was definitely not even close. I decided to send an email to the journalist at the Hamilton Spectator asking him how as a journalist he had the right to blow this guy off without doing any investigative work but he blew me off and ridiculed me.
What is really upseting to me is that we did not get a chance to film what we saw. I have since found some videos on youtube of people in Burlington and all over the world observing these things, but I have yet to see one where they were as close to the ground as the ones we saw. I forgot to mention that they did not appear to be very large. My guess would be about 3 feet in diameter. Also, when i say that they are red and orange in colour, picture heating a metal object. It had a bright orange centre and red around it. they looked like they were super hot and did not make a sound.
I have now become completely obsessed with this and continue to search for information. From watching many shows such as ancient aliens, ufo files and many others since my experience I understand that ancient civilizations have recorded existence of these orbs.
That was a truly incredible experience for me.  NOTE: The above image is a rendering