10-19-98  CHANGZHOU CHINA
On Monday, October 19, 1998, four military radar stations in Hebei province, China, reported the presence of an unidentified blip hovering above a military flight training school in Changzhou. Once authorities determined that the intruder was not a military or civilian flight, Colonel Li, the base commander, ordered a Jianjiao 6 jet fighter to take off and intercept the UFO. At least 140 people on the ground saw the object. To observers at the base, the UFO first appeared to be “a small star” and then grew larger and larger, perhaps as it descended to a lower altitude, the report said. They described an object with a mushroom-shaped dome on top and a flat bottom covered with bright, continually-rotating lights. 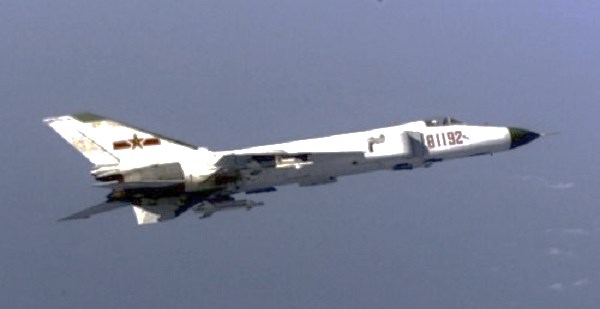 The crew of the Jianjiao 6 interceptor consisted of a pilot and a radar officer. The two officers said “the object clearly resembled depictions they had seen in foreign science fiction films. When they got within 4,000 meters (13,200 feet) of the UFO over Qing county, it abruptly shot upward, easily evading subsequent attempts to get closer. It appeared to be toying with the fighter by repeatedly outdistancing it and then reappearing right above it, the report said. The pilot requested permission to fire on the UFO with the plane’s automatic 20mm cannon. He was denied permission to shoot by ground control and was told to continue to pursue and observe the object. The pilot broke off pursuit at an altitude of 12,000 meters (39,600 feet) when the jet began running low on fuel. The UFO then disappeared before two more modern (Chinese fighter) planes could arrive in the area.
Changzhou is 150 kilometers (90 miles) northwest of Shanghai. (See the Hong Kong Standard for November 4, 1998. The story apparently first ran in the Hebei Daily around October 22 and was picked up by the Chinese weekly newsmagazine Baokhan Wenzhai. Many thanks to Errol Bruce-Knapp and Andy Denne of A.U.R.A. for forwarding the article.)  NOTE: The above image is a rendering.

20 thoughts on “CHINESE FIGHTER JET PURSUES A UFO OVER CHINA”