I was outside in my driveway speaking on the phone around 10pm the night of March 30, 2013, when I happened to see something coming from east to west at a steady speed with a bright glowing red light that encompassed the entire object. After a few seconds, the light turned bright white. Only a few seconds later, another object appeared the same way following the first, at which point I ended my conversation abruptly since I could not understand what I was seeing and started taking pictures with my camera phone. The two objects were then followed in quick succession by 3 more objects of the same nature. They would glow bright red, which would last a few seconds, and then turn bright white. There were no visible blinking lights as in an aircraft. I kept my hand as steady as possible taking the pictures. The objects made no sound whatsoever. Thinking they may be planes or helicopters flying in formation, I kept listening for any sound as they seemed only a couple miles and were at the distance above the ground as a low flying plane, but I did not hear anything at all. I am outside at night alot observing the night sky, and we get planes and helicopters flying around all the time being able to see in the distance the flight path of planes coming into Ft. Lauderdale Intl airport or the local landing strip downtown Ft. Lauderdale, but I have never witnessed anything like this and felt compelled to report it. 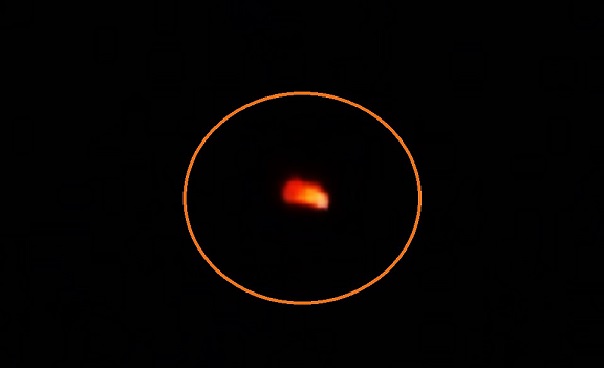 The lights/objects flew in close formation, one in back of the other, heading west, and then just disappeared, just blinked out, when it seemed that the distance they were away from me, they should still have been visible. The entire event lasted about a minute. I was in awe as I observed the objects, waiting for the telltale signs of them just turning out to be airplanes or helicopters, like blinking lights, engine noise, the bright spotlight planes use when coming in, but I observed none of these. The objects did not make any abrupt turns or anything, but flew at a steady pace following each other, intermittently glowing red, and then disappeared. I felt very shaky and nervous after since I could not explain what it was, and shared the event with family members. I thought maybe the pictures I took could explain what it was and decided it was worth reporting. The pictures were taken with a 3.2 megapixel Samsung camera phone, and if they can be blown up and made more decipherable and detailed, I would love to know what these objects were!