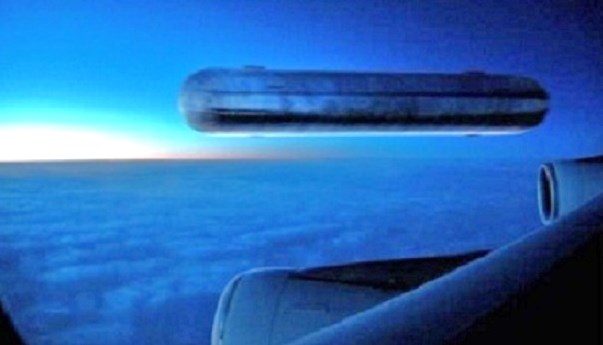 I was on a US air flight 2646 from Austin, Texas to Charlotte, North Carolina arriving around 3:00 pm on April 5th. As we made final descent to Charlotte Douglas Airport, I was looking out my window when I observed an unusual object that caught my eye. We were roughly 200 feet from the ground when the incident occurred. I was looking down at the cars on the streets and people in their yards when a fast moving cigar-shape object that appeared to be 6-10 ft. in length flew past the plane going the opposite direction that the plane was traveling. It looked like it was leaving the airport and passing us. The object was between the plane and the tree tops, so I was looking down on it at a 45 degree angle.  It appeared to be cigar-shaped with greyish dark dull exterior tapering slightly toward the ends of it.  I followed it with my eyes with my forehead pressed against the window. I strained to see it as it disappeared out of view to the rear of the aircraft and was eventually blocked by the depth of the plane window.  It appeared to be moving very fast and I tracked it only a couple of seconds before it zipped out of view. Even though the object was traveling in a straight horizontal path, it seemed to begin to ascend a short distance after it passed the rear of the plane. I am a non-believer in these sorts of matters. I only report this out of curiosity of what it was I saw. I thought maybe a balloon used for air direction, but I saw no visible tethers on the object and I thought wind indicators would have bright colors to make them visible to pilots.

This was dull color and moving at fast rate of speed. I googled such balloons but found nothing like what I saw. I thought if it was a toy floating then flying it near landing planes would be dangerous to the airplane. There were no exterior features like fins or markings.  I waited until my trip was over to reflect on and finally write what I saw. Curious if it could have been an everyday item that I mistook for a strange object.  Perhaps a pilot or someone who lives in the neighborhoods near Charlotte Airport could explain what it was I saw. NOTE: The above image is a rendering.

29 thoughts on “AIRLINE PASSENGER SPOTS A UFO OVER NORTH CAROLINA”