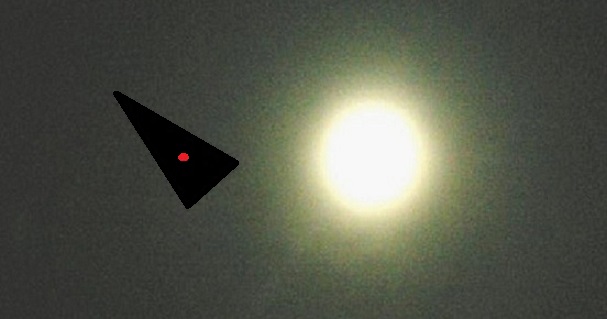 COUPLES CLOSE ENCOUNTER WITH A TRIANGE OVER KENTUCKY

On November 28th 2012 at appx 6:30 p.m. my fiance and I were traveling south on hwy 139 going home. We were talking and had the radio on in our car when bright white lights caught my attention to my left as I was driving. There was a red light that flashed a couple of times as well. At first the distance of the lights was so far away over the field that I assumed it was some sort of cell phone or radio tower as it appeared to stand still in the air above the field. Then as we coninued down the highway it started moving parallel with our vehicle. I asked my fiance repeatedly “What is that” he said over and over I don’t know.  He said its probably an airplane which could have been possible because of our close proximity to the army base and we see helicopters fly in and out routinly. However I thought it was strange that it had hovered for so long over the field and it seemed to be following us. I was so in awe of this craft that I came to a stop in the middle of the hwy not realizing there was a vehicle directly behind me. Luckily they saw what we were looking at but just went around us as we sat in the road and they continued down the hwy slowly. When we stopped it seemed as thou the craft stopped as well but I can’t say for sure that it came to a complete stop or if it was going so slowly that it just appeared that way. We sat in the car observing the craft for only a couple of minutes when it took off and we decided to keep up with it so we followed passing the road to our house and continuing for about 2 1/2 miles. When the craft was too far and fast for us to catch up my fiance pleaded with me to turn around and go home because we didnt have enough gas to waste driving after something that was already gone. I decided he was right when I could no longer see the craft. Plus it was dark and we weren’t entirely sure of what we saw. I turned around in a near driveway and headed back toward our rd. Right before we reached our road then on the right side we caught a glimpse of the same craft coming back. So I pulled off the road at a gravel spot directly across from our road. We watched as the craft came over the field by our road in front of us. I took out my cell phone and started to call 911 forgeting that we have no service close to where we live or anywhere near our road. I’m not sure why I was gonna call but I was starting to become alittle frightened but still in total awe as was my fiance. We couldnt take our eyes off of it because its actions were so peculuar. I did manage to use my cell phone to video brief clips of the craft when it was not so far from us. We stood with our car doors open leaning on the doors but still close enough that we could jump in the car quickly if we needed. It hovered several minutes almost directly in front of us and to be honest I believe whoever it was was watching us because while I’m trying to video record with my phone it went from a complete stop hovering in front of us to slowly flying over the top of us at such a low altitude that it frightened us back into our car. As it came upon us I could see a definate triangle shape or like boomerange shape but it absolutly had 3 points with lights and a red light that only occasionally flashed.We watched out the windows trying to see which way it was going but the lights didn’t come into view so I raised up and looked through the top of the windshield and realized that it was hovering over us. My boyfriend kept yelling at me to go, just drive but I wanted, no I had to keep watching it even though I was scared and it felt alitte surreal. It didn’t stay over us but a minute or so and when it took off it slowly continued on the slow path it was on then when not far from over us it shot off in the opposite direction like a bullet back over us and quickly out of sight. We sat a minute talking about what we had just saw and once we gathered our thoughts we left and went straight home. When I got home and finally got a cell signal and I called my dad to tell him what we experienced and he assured me that it was probably a slealth plane from my describtion and we live so close to the army base that we wanted to credit it to nothing more than an army aircraft but I have talked to people that say a stealth plane cannot hover or go forward stop abruptly, then go straight backwards. I would like to know how I could find out how I would go about getting radar records for what was in the area over hwy 139 and intersectin 164 that November evening at 6:30-6:40pm central time. I want to think that it was military but I’m afraid that it was something else and if it was army aircraft they were playing a game with my fiance and I. And if it wasn’t then it just left us with more questions. NOTE: The above image is a rendering.