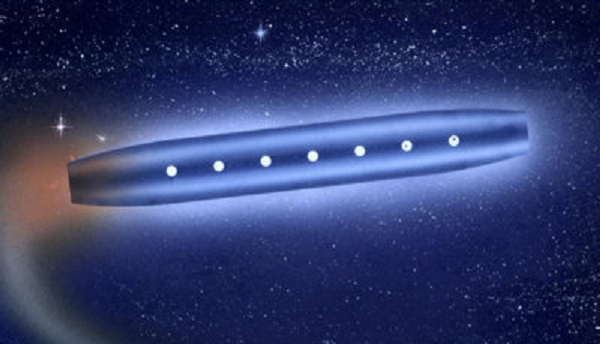 I was in my apartment in back of the west park shopping center in Mansfield Ohio.  The apartment complex is called the Harwood apartments.  The apartments has a road down the middle and at the end of that road on the right side was the apartments where I was living.  We were the 2nd apartment on the far end.  I walked out the door in the front and I looked up but I’m not sure why and that’s when I first noticed the edge of it moving straight foreward over me.  .  I thought what the heck is that!  It was moving at a walking speed and then I started to notice their were yellow/white circles on the edge aprox 3 foot around each and I’d say maybe 5 ft. between each circle.  Then there were other openings or lights of the same size and color on the inside and the same distance apart. The outside lights were stationary but the ones on the inside were rotating clock wise. They appeared to slow to a stop then reverse direction (counter clock wise) then repeat this action over and over while I stood there with my mouth open trying to figure out what I was looking at.  The end went over my head as the front end went aprox.50 ft.past the trees ahead.  Outside my door is a walkway to the sidewalk.  A railroad track (now a bicycle trail) is about 200 to 250 yards of woods.  It went aprox 50 ft passed before the back end went over my head.  It was dark out but I could make out the outlined edge which was cigar shaped.  It did not make any sound at all.  It didn’t move any leaves when it went over the woods in front of me nor did I see the tree tops light up as it went over.  So maybe they weren’t lights.  The object from beginning till it ended over the trees lasted aproxamently 55 seconds.  I drove down Park avenue west in the same direction that it was traveling. I estimated where it started and ended best I could and on my odometer it read 2 tenths of a mile.  NOTE: The above image is a rendering.