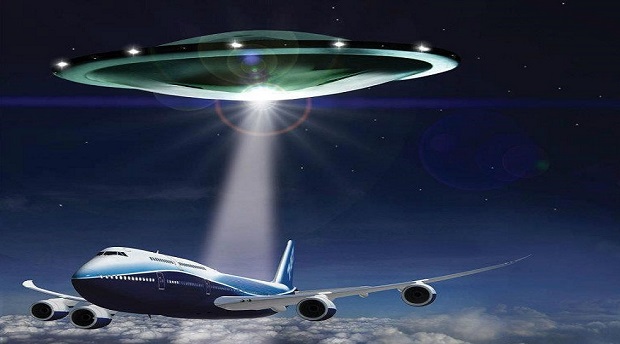 NEAR MISS WITH AN ALIEN CRAFT OVER ENGLAND

JANUARY 6 1995 NEAR MANCHESTER ENGLAND
THE B737 PILOT reports that he was over the Pennines, about 8 or 9 NM SE of Manchester Airport, at 4000ft, while being radar vectored by Manchester radar on 119.4. He was flying at 180-210 kt on a N heading and squaking 5734 with Mode C selected. Although it was dark, visibility was over 10 km with a fairly strong NW wind (340/30). While flying just above the tops of some rugged Cu both he and the first officer saw a lighted (see JAS notes) object fly down the RH side of the ac at a high speed from the opposite direction. He was able to track the object through the RH windscreen and side window, having it is sight for a total of about 2 seconds. There was no apparent sound or wake. The first officer instinctively ‘ducked’ as it went by.  The first officer reports that his attention, initially focused on the glare shield in front of him, was diverted to something in his peripheral vision. He looked up in time to see a dark object pass down the right hand side of the ac at high speed; it was wedge-shaped with what could have been a black stripe down the side. he estimated the object’s size as somewhere between that of a light ac and a Jetstream, though he emphasised that this was pure speculation. it made no attempt to deviate from its course and no sound was heard or wake felt. He felt certain that what he saw was a solid object – not a bird, balloon or kite.
MANCHESTER ATC reports that the B737 was being radar vectored from Dayne to the ILS for RW 24 when the pilot reported a lighted object passing close by above and in the opposite direction. There was no known traffic in the vicinity at the time and no radar contacts were seen.  JAS Note (1): Telephone conversations subsequently took place with both the captain and his first officer. the captain remained convinced that the object was itself lit. Although he could not determine a definite pattern, he described it has having a number of small white lights, rather like a Christmas tree. He confirmed the high speed of the object, and though unable to estimate the distance, said he felt it was very close. Following the incident, the captain and first officer independently drew what they had seen, both agreed about the shape but differing in their opinions about the lighting aspects. The first officer felt that the object was illuminated by their landing lights, which at that stage were switched on. He was unable to assess the distance, other than to say that he involuntarily ‘ducked’, so it must have appeared to him to have been very close. He was entirely convinced, as was the captain, that they had seen a solid object and not a Met phenomenon, balloon or any other craft with which they were familiar, or a Stealth ac, which he [the captain] had himself had seen and which he feels he would have recognized.  NOTE: The above image is a rendering.
KEN PFEIFER WORLD UFO PHOTOS AND NEWS
WWW.WORLDUFOPHOTOSANDNEWS.ORG
WWW.UFOEVIDENCE.ORG
WWW.WORLDUFOPHOTOS.ORG