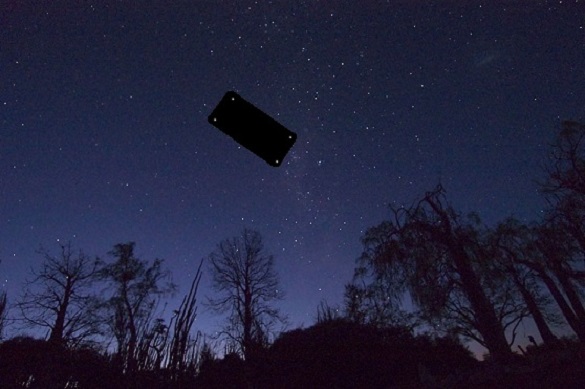 One evening in the Spring of 1975, my girlfriend and I were driving through the Kansas countryside. After crossing a cement bridge that spanned a river, we pulled into a farmer’s access road and parked at the edge of a field alongside a bend in the river with the car pointing east. Not long after we stopped we noticed a strange light that suddenly approached our location in a quick “blur”. Suddenly, hovering above the tress was a dark object, rectangular in shape with on red & one green running light positioned together on the lower part of the craft at its center. We stared in amazement and couldn’t take our eyes off the object.  After 5 minutes or so, we noticed the craft’s position had moved to the right. It seemed to move in a very slow motion to the other side of the river. After another 5 minutes I decided to drive away from the area. As we turned onto the county road and subsequently onto the cement bridge we saw that the craft had returned to its original position, above us and slightly back from the bridge. I stopped again and got out to look at the craft.  The object was about 20-25 ft. wide and now I noticed a large rectangular glass window, or what appeared to be glass, running across the middle third of its front. Standing inside to the left side looking down on us were two beings, which I could see only from the waist up but could tell that theses beings were about 4 ft tall, with abnormally large heads and large black eyes. The eyes seemed devoid of emotion and their skin was pure white, like the moon, the texture resembling that of an albino salamander. Their eyes ran almost north/south with their heads. The craft hovered silently the whole time. After about a minute of eye contact with the humanoids I got back into the care and rapidly drove away from the area. We could still see the craft hovering where we had left it.  My girlfriend and I eventually married and still live very near to the location where we witnessed this craft. Sometimes, we both get an urge to return to the spot and just sit there and talk about our shared experience, kind of hoping these beings would stop by.  NOTE: The above image is a rendering.

34 thoughts on “LARGE RECTANGLE SPOTTED BY TWO WITNESSES OVER KANSAS”