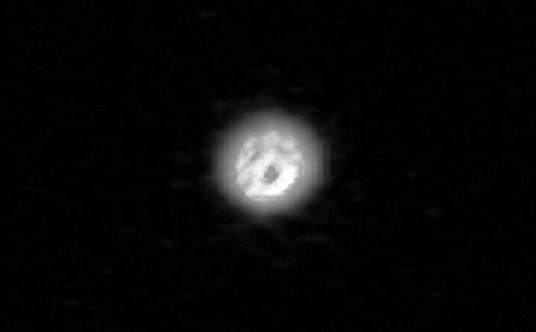 Two police officers have dogfight with UFO during helicopter patrol

Two Jefferson County air unit police officers — described by their lieutenant as “solid guys” — swear they had a two-minute dogfight with a UFO during a routine helicopter patrol Friday night.  Two officers on the ground said they, too, spotted the object. The UFO — a glowing pear-shaped object about the size of a basketball — literally flew circles around the helicopter, even though the fliers say they were moving at speeds approaching 100 mph.  In one blinding moment when both craft were hurtling toward each other, the UFO shot three baseball-size fireballs out of its middle, all three officers said. The fireballs fizzled into nothing. Officers Kenny Graham and Kenny Downs haven’t talked much about their Friday night flight over General Electric Appliance Park because they fear few will believe them. But they are convinced they weren’t hallucinating. “We both go to church every week,” Downs said as a way of explaining how normal the two normally are. “In fact, I might start going to church twice a week.” Officer Mike Smith, in his squad car below, said he saw the object for only about a minute. But he confirmed the UFO shot three fireballs into the air and then disappeared. Officer Joe Smolenski said he tried for more than a minute to catch up to the object in his squad car. “I’ve been looking for ’em for 14 years, and I guess this is the closest I’ve come to something I couldn’t explain.”  Lt. David Pope, who was roused out of bed at 12:30 Saturday morning by a call from the startled officers, attested to their sanity and sincerity.  “These guys are totally solid guys,” Pope said. “There’s no doubt in my mind there was something out there.”  The night started out like every other night. Graham and Downs got to work around 6 p.m. and were soon in the air flying a routine patrol. Graham, 39 and an 11-year veteran, was the pilot. Downs, 39 and a five-year veteran, was the spotter.  While in the air, they received a call about a possible break-in near Sanford Avenue and Buechel Bank Road. They flew off and quickly reached the area, which is near the northeast comer of Appliance Park, around 11:50 p.m.  As they circled, Graham saw something that looked like a small fire off to his left. Dozens of bonfires had been lit around the county that night by revelers delighting in the new snowfall.  But Graham soon decided i! wasn’t a fire. 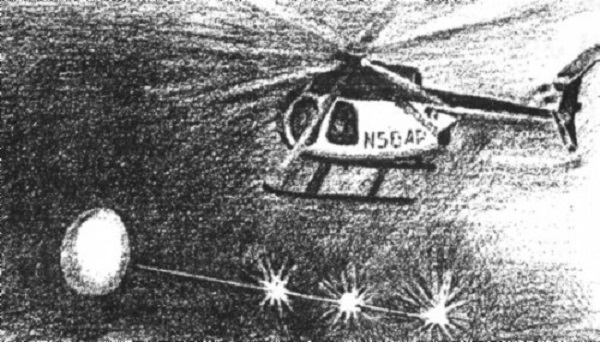 Downs shined his 1.3-million-candlepower spotlight on the object, which began to drift back and forth like a balloon as the light washed over it. Then it gradually floated up to the helicopter’s elevation about 500 feet above the ground, where it hovered for a few seconds.  “Then it took off at a speed I’ve never seen before,” said Graham: an experienced pilot.  The object made two huge counter-clockwise loops and finally approached the helicopter’s rear.  Graham, afraid-the object would ram his tail rotor, pushed his speec above 100 mph. The UFO shot past them and instantly climbed hundreds of feet in the air. It descended again and flew close to the helicopter. Graham tried to close the gap with the object, and it again flew away. As the UFO approached on a parallel course, the three fireballs burst out of its core.  Scared, Graham banked away from the object. “When we came back around, it was gone,” Graham said.  When the two returned to their base, Graham called the control tower at Standiford Field to ask if their radar had spotted anything unusual. It had not.   Downs called the county’s radio dispatchers to ask if anyone else had reported sightings. No one had.  But the two did get confirmation from two officers on the ground, one of whom was Smith.  “I have no idea what it was,” Smith said, but his confirmation cheered the two fliers.  “It makes me feel better,” Downs said, “that there are… grown men out there who are sworn to protect this community and who saw the same thing.” NOTE: The above image is a rendering  The above photo was taken by a witness  on 12-24-11 in Boise Idaho.