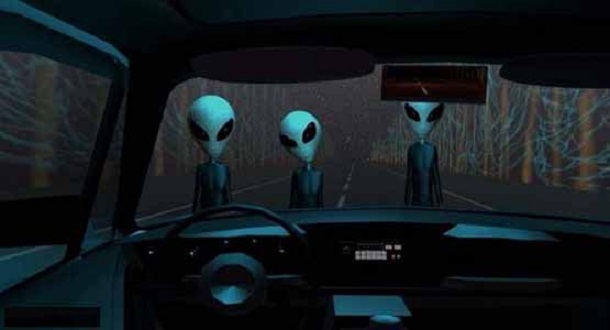 A remarkable case of alien abduction with missing time comes from Wales. Multiple sightings of UFOs on one night, preceded by several unusual light beams reported over the Great Orme are related to us by well known investigator Margaret Fry. The events of November 10, 1997 center on one unfortunate family who were in the wrong place at the wrong time. For a brief period of time, they entered an unknown realm of other worldly beings. The family was driving along on the Bodfair / Landernog road when all of a sudden their car was engulfed by purple…a purple craft seemed to join itself to their automobile. The next clear memory any of the family had was that the craft was suddenly gone…like it just disappeared into thin air. The family was again driving down the road, resuming their journey except for the feeling of the loss of time. “But they could not account for considerable hours of time lost,” said Fry. “The male was having trouble afterwards with a top molar tooth and he had to go to the dentist’s…and a black unknown object fell out while he was at the dentist’s – but he had no fillings,” she said. Shortly afterward, the male driver of the car reported the strange happenings to local authorities. Soon he was visited on two different occasions by Air Force personnel. They warned the man to never speak of the events of November 10, 1997 publicly. These visits are very similar to tales in America of the infamous “men in black.” The strange purple craft and missing time experienced by the family was told only to a friend, who in turn related the event to investigator Fry. The names of the individuals involved remain anonymous. The case of the alleged abduction is extremely interesting in the light of the reports of the strange light beams and another eerie encounter of the same night. A local business man would corroborate the two other sightings with a bizarre report of his own. The man claimed to see a strange craft on the same road as the abducted family’s encounter took place. He described the craft as enormous, and the shape of a “child’s spinning top.” He was able to draw a sketch of what he observed that night, while stopping to look at a UFO as big as a football field. The UFO, a classic saucer shaped object, was seen hovering over buildings in the village of Llandernog. He claimed that the large craft had a “myriad of lit windows, ” and was large enough to be a mother ship capable of transporting hundreds of people. What was this enormous ship seen that night, except a visitor from another world? The case has never been explained by any earthly object or conventional means, and remains a mystery to this day. NOTE: The above image is a rendering.