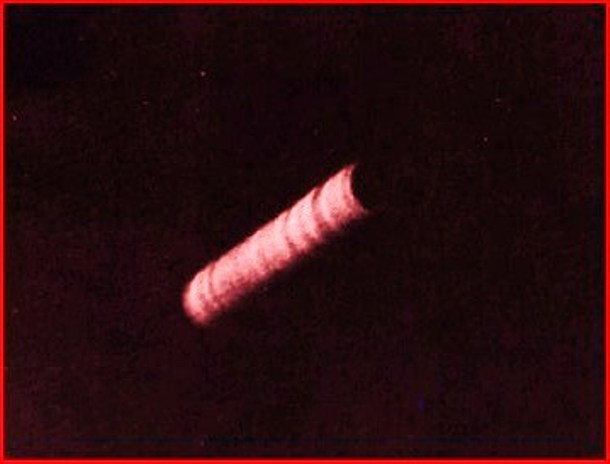 STRANGE CYLINDER SPOTTED IN THE SKY OVER PENNSYLVANIA

Earlier in the day we had a violent thunder storm that had hail and tornadic like activity. I couldn’t sleep because the weather channel said that there was another line of storms coming through, although they never did. I decided that I would just sit up in bed for a while and say my evening prayers.  I was not tired. I have a habit before I go to bed at night that I always look outside my bedroom window because I love to look at the stars and I was also check on the weather that evening. There are no street lights where I live and it is very dark at night. We are surrounded by Amish farms. I like it dark when I sleep so all the inside lights were off as well. As I scanned the area I saw an object that I could not explain. It was cylinder in shape. It stood out against the night sky and it was a blotchy reddish orange color that pulsated. There was no noise; no airplanes, no animals, no cars, no thunder, nothing. It was dead silent. It was moving very slowly from right to left over my neighbors houses. I followed it with my eyes as it passed 2 houses, it had a steady path that was so slow I wondered how it was even staying up in the air. It was not fuzzy looking and it had a solid out line. Just under the top of the cylinder it had a thin lighter red band or ring that really stood out to me. As it approached the third house it simply vanished. It was just gone. Needless to say I stayed up and watched the sky for about another hour, and it didn’t return. I still an amazed by what I saw, but at the same time it is somewhat unnerving. I do not drink. I do not do drugs. I am not crazy. I know what I saw.  NOTE: The above image is a rendering.