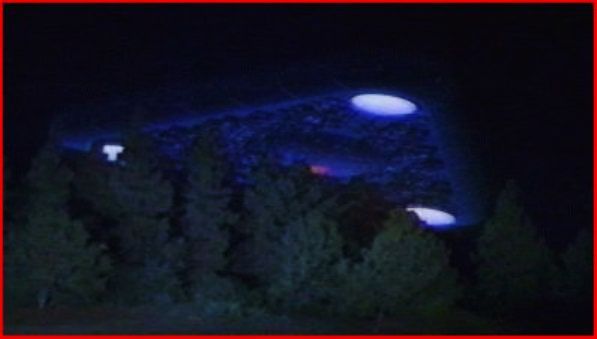 I was working in west Texas for a water hauler company. My night job was filling fracking tanks for energy companies to use to frack formation in drilled wells. I had to stand on top of my truck to monitor the volumne as I unloaded by pump my tanker. I would lose prime on pump if it fell to low. We had a bright light that lit the area up around the tanks being filled. I was on the fartherest row of tanks away from the light station. I had my back to the light in the west. I was facing east and looking up for meteors in th dark sky in front of me and periodicly check the volumne. As I was facing east I notice an object in my right peripheral vision that my mind was saying a flock of birds due to the size. Even as I looked directly at it for an instance my mind finally realized it was a triangle shape vessel. The bottom had 5 slightly glowing domes in the triangle shape and the light glow was in the flight pattern of geese flying as seasons change. Anyway it was silent made no sound. It moved at an angle from my right to in front of me or I turn more in the direction it was flying. When it came to my front it turned slightly and the shape changed due to the rear was now in vision. and accelerated and in less than a second speed away. The rectangle shape , or rear of vessel just grew smaller until it disappeared. The vessel moved like some low altitude jets do in flight manuvers here in Alabama where I live. The 5 Domes were surrounded by black color That I could see against the star lit sky. The sides had lower half black and upper half lighter grey color. the top was the same grey. The vessel was hard to determine how far away it was but if it was around 1/4 mile away it was about 300 to 400 feet long and the rear was about 150 to 250 feet wide. It was maybe 75 feet thick. the domes were about 20 feet in diameter with black space, color, in between them. That is the best I can describe it now.  NOTE: The above image is a rendering.