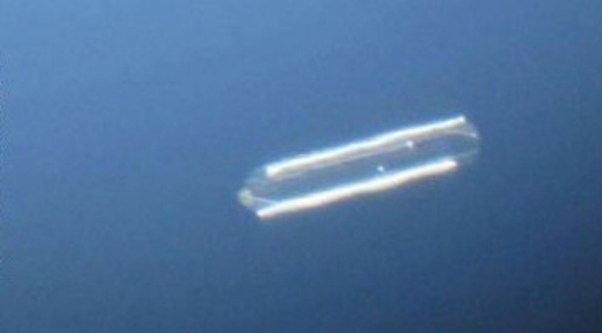 MANY WITNESS THIS STRANGE UFO OVER MANY STATES

Pretty soon, even their customers were outside looking at the object. Soon, even his newspaper coworkers were outside taking a look. Hundreds of people in the Williamson, W.Va., area, including Pikeville, Ky., and Virgie, Ky., eventually reported seeing the object. Among the witnesses were the number of jets flying overhead as the object continued to hover for several hours. Lovern estimates at least 20 flew through the area. “Now this is only a theory,” he said, “I think this thing was showing up on the radar and they were checking it out. They were so close together, and so many of them, I don’t think they were passenger jets, but they were so high, I couldn’t tell for sure.”The object eventually disappeared from the sky while Lovern was on his way to the local high school to get photos from a higher elevation. The sightings were reported in the local media, including by Lovern himself, and also made headlines in a few national sources. It was also investigated by MUFON, the Mutual UFO Network, an organization based in Cincinnati, Ohio, dedicated to investigating UFO sightings around the world, and declared to be “unexplained.” Some of the best images of the object were taken by an amateur astronomer, and area high school teacher, Allen Epling, who used his telescope to capture video of it. There were numerous sightings of the same object at the same time in an area covering 4 states, and reported to the police and newspapers. Sighting was with clear, blue, cloudless skies, no aircraft in sight, altitude unknown but definitely above airliner cruising altitude. The object hovered roughly in the same location for over 2 hours, not drifting more than 10 degrees in any direction. Was sighted approximately 60 degrees above the horizon.

The Oct. 16 sighting was not the only sighting of the object. A similar sighting was reported one day before in Huntsville, Ala., one day later in Cross Junction, Va., and again on Oct. 18, in Gardiner, N.Y.  Epling and MUFON International Director, Dave MacDonald, both gave interviews to media outlets claiming the object’s appearance and behavior are something they cannot explain. NOTE: The above image is real and only one of many incredible photos.

32 thoughts on “MANY WITNESS STRANGE UFO OVER MANY STATES”