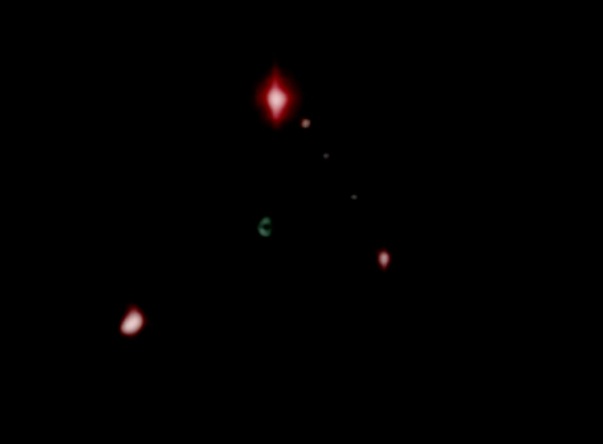 Me and a few friends were walking to the store at around 3:30am to get snacks. We walked through a large park with soccer fields, baseball fields and lots of open space surrounded by a forest. I saw the triangular shaped UFO flying relatively low over on of the soccer fields and it flew directly over us and continued on its path. I know this was not a plane or helicopter as I am very familiar with those. I saw the object peak over a line of trees and it immediately caught my attention as it did not look like anything Ive ever seen before and I tend to pay lots of attention to the sky above me anyhow. When I got a good look at it, I knew it was a UFO. I didnt think it was anything else. It moved along one path making an odd hovering sound (“hmmm”). It had 2-3 solid red lights on it that were large and circular and at least 1 white light that was a bit smaller and blinked a few times. Its hard to explain and be sure, though. When I saw it, I stared at it until I lost sight of it totally and about 5 seconds after watching it I had concluded that it was the classic triangle-shaped UFO. I was very excited though, as this is the first time Ive seen a UFO that was undoubtedly the same kind many other people have reported seeing. All other “sightings” Ive had were too high up and hard to tell if it was just an ordinary plane. I lost sight of the object when it went behind another line of trees and out of my view. After the sighting, I looked up triangular UFOs and me and another friend that saw it agree it looked exactly like the picture I have attatched. Let me be clear that this is NOT a picture of the actual craft that we saw but it looks exactly like it. Earlier in the night the four of us were getting into some really deep conversations about spirituality and how we got here and annunaki and higher intelligence, E.T.s and these types of subjects. It was one of those conversations where you just really feel on to something different. I really believe that our conversation and the UFO sighting are related. NOTE: The above image is a rendering.