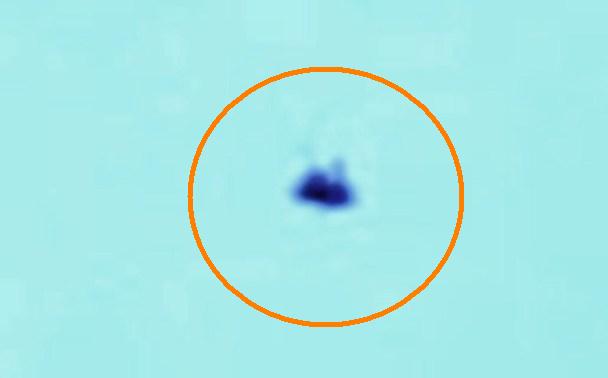 ALIEN UFO SPOTTED NEAR A PLANE CRASH ON LAKE MICHIGAN

Description: My name is T.K. I live in St Francis, WI at the Landing Lake Condos. A plane crashed into Lake Michigan. A single prop plane crashed killing two people. Police were looking around in the Lake. News organizations were there to report the incident. My girlfriend Pam and I went out to look after hearing about it. It was a little after the crash. I guess the time was about 5 PM. I noticed up in the sky and saw this black “Mickey Mouse eared” floating black object floating in the sky near, but not directly above, the boat activity. It was northeast relative to my position on the lakefront. There was no sound. It floated or hovered. It was very difficult to capture with my girlfriend’s Olympus camera. The focus went in and out. Luckily it was set to take quick shots in rapid succession and I captured these images. Then the object slowly moved up and away. It disappeared into the clouds as it moved east over the Lake. I hope you find the photos interesting. I used my girlfriend’s computer to crop and zoom in on the images. She still has the originals on a memory card for the camera. If you have questions, feel free to email me. Note: The original photos have been requested. It is difficult to explain this sighting. It looks like some sort of floating debris, but the fact that it ascended out of sight debunks this explanation.

The bodies of two middle-age males were pulled from the plane, which was found beneath 42 feet of water, said Erik Leuenberger, search and rescue mission coordinator for Lake Michigan for the Coast Guard. The Coast Guard identified the pilot as William Gensler of Racine. Officials said they were not releasing the name of the second victim, pending notification of relatives. Rescue crews from the Coast Guard and Milwaukee Fire Department responded to the crash, which was reported about 2:50 p.m. Sixteen divers searched the lake for more than six hours. Two helicopters and seven boats assisted in the search. Officials said it isn’t known whether any others were on the plane and that the search would continue until they confirm that no others were on board. The plane was a four-seat, single-engine 1975 Piper Cherokee, which was reported down about 1.5 miles east of Cudahy. The plane is registered and based out of Batten International Airport in Racine, where it took off at about 2:30 pm Saturday, according to airport general manager Dave Mann. The Coast Guard said the plane apparently was bound for Oshkosh and the EAA AirVenture, which begins Monday. NOTE: The above photo is one of many that was supplied by the witness.

SPECIAL THANKS TO WILLIAM PUCKETT AND WWW.UFOSNW.COM