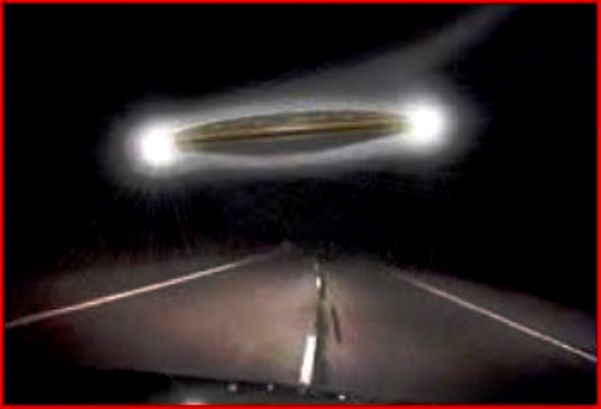 August 27, 1979-Deputy Sheriff Val Johnson of Marshall County was on duty that night, driving not far from the North Dakota border, when at around 1:40 a.m. he saw a light through his side window. It was obviously not on a road and looked too glaring to be a car headlight. He first thought it might be a small plane on or very near the ground. He turned left on another road to try to get closer to the light to identify it. Suddenly, the light moved toward him, travelling so fast that it almost instantaneously was upon his car (covering an estimated mile and a half). Johnson was blinded by the brilliance of the light and heard glass breaking, then lost consciousness.

Back home for her 55th class reunion, Janet Anderson visited the Marshall County Historical Society Museum. It’s a routine stop whenever she and husband Lyle return to their hometown from their residence in Sun Valley, Idaho.  The top museum attraction for the Andersons — and many others — is a patrol car from what’s commonly known as the “Warren UFO Encounter” of 1979, the Grand Forks Herald reported:  “Most of this kind of stuff, I don’t believe,” Janet said. “But I believe this story. You have to believe in some things that you don’t understand.”  The Andersons aren’t alone. During county fair week each summer, museum visitors routinely number 5,000.  “The car is the single item that most people mention as their reason for coming here,” said Kent Broten, the museum president.  Added Vice President Mike Johnson: “People drive hundreds of miles out of their way to see it. At least, that’s what they tell me.”
Dennis Brekke, the county sheriff in 1979 and now retired, regaled the Andersons and others about the incident, which involved Deputy Val Johnson, who is believed to now live somewhere in Wisconsin. Johnson appeared on “Good Morning America” soon after the incident, but quickly grew tired of interviews and attention about the episode. 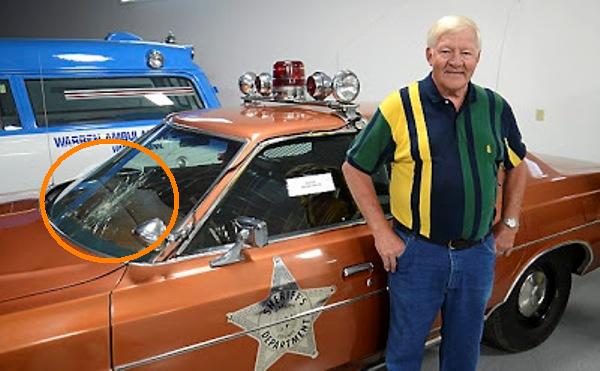 Dennis Brekke — sheriff of Warren, Minn., in 1979 — stands in front of the car that reportedly was struck by a UFO that year. Brekke said the incident began when deputy Val Johnson decided to check out a bright light. Johnson’s vehicle eventually collided with a foreign object that shattered the police car’s headlight, dented the hood, cracked the windshield and bent two antennas. (AP Photo/The Grand Forks Herald, Jenna Watson)

Bit by bit, Brekke recounted details that baffled investigators, including Honeywell scientists:  The patrol car left skid marks of 800 feet. Johnson suffered “welder-type” burns to his eyes from bright lights. The car’s two antennas bent, one at a 90-degree angle, one at 45 degrees. Both the patrol car’s clock and Johnson’s watch stopped for 14 minutes. Johnson remembered nothing during a 40-minute time period. The windshield was cracked, but the force of the damage didn’t seem to come from either outside or inside forces.  “Val told me that he knew something happened, but he didn’t remember what it was,” Brekke said. “The last thing he remembered was a big light that came all of a sudden.”  County officials wanted the patrol car, a rust-colored 1977 LTD with only 60,000 miles on it, repaired and returned to the fleet. However, Brekke said, he persuaded them to leave it as it was for public consumption.  “People like strange and unusual things they don’t understand,” Brekke said.  The Warren UFO has resulted in two programs on the History Channel and another in 2012 on the Travel Channel, according to Herald archives.  “Some people who come to my talks believe in this and some are skeptical yet still curious,” Lewis said. “Some are hoaxes, planes or satellites, but some are unexplained. I leave it up to the audience to make up their own minds.  “Plus, I simply don’t know. After more than 20 years of doing this, I’m left with more questions than answers.”  However, 82-year-old Ethel Thorlacius, who has worked at the museum for decades, has witnessed a trend. “At first, a lot of people made fun of it,” she said. “But there’s a different mentality now. People are much more likely to believe there is something different out there, that we’re not alone.”.  NOTE: The above image is a rendering except for the police car photo.

32 thoughts on “ALIEN CLOSE ENCOUNTER AND PHYSICAL EVIDENCE IN MINNESOTA”