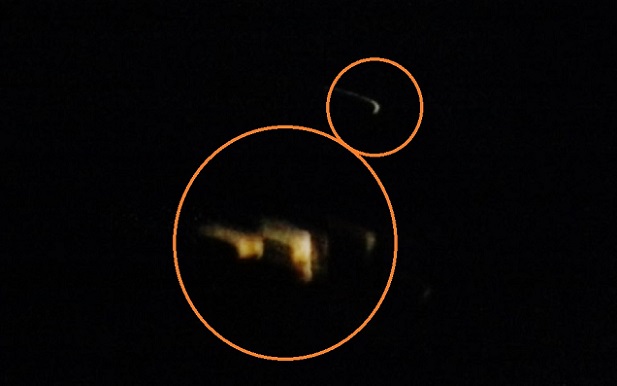 I was walking to my parents house at approx. 10:30-11PM. I was on the phone with a friend. 100 yards from while I was observing a very large orange ball of light hovering about 15 miles of my position. After a few minutes a billiards triangle shaped object swoops in as if sliding sideways on its edge. Making it possible to clearly make out its outline and position of large soft white lights at each corner with a larger soft red center. I was quick on the draw already snapping pic while relaying what I was seeing to my friend and had the phone video camera rolling as it rolled flat never made a sound. I then noticed that there was another further south and then another etc. I counted 8 total all hovering at what appeared to be the same altitude. The triangle moved in an L shaped trajectory headed south toward the orange objects and so low it passed behind a grove of trees. When it emerged it appeared to be a helicopter. I don’t mean I misidentified, I mean it looked like a white bottomed blue lit skid rail with a red rear prop light and white nose light which was not descernable through the camera. It traveled about a mile before it banked right on its side and dove like a high diver into the trees again no sound and only about 3.5-5 miles away probably over Meridean st.  The orange lights would occasionally move in unison a short distance.

I was shocked to catch a third set of craft moving fast and low together almost the same way a roller coasters carts look if there were only 2 carts and you could only make out two bright pulsing red lights in the low front fog light position . With a single pastel blue pulsing light in the rear higher than the fronts significantly. They were silent, very low and directly south of me headed west to east. They were the smallest and shortest sighting. The entire event happened over a 1 mile stretch of road in the area that I spent the better part of 27 years. I have watched these skies from this area my entire life and only experienced something this life changing once before. It should be noted that immediately after the second craft dove into the trees there was an intense static in the air and the smell of ozone was that of an impending rain squall. However, there wasn’t a single cloud in the sky nor mosquito to swat.  Please feel free to contact me for any additional info via email or phone. I have attached the video pictures of the triangle craft and balls of light. I assure you that this is legit as I have spent every night listening  Coast to Coast am program while watching the rural sky and have waited for the chance to share an important event. I believe this is that event. Thanks for being available to us.