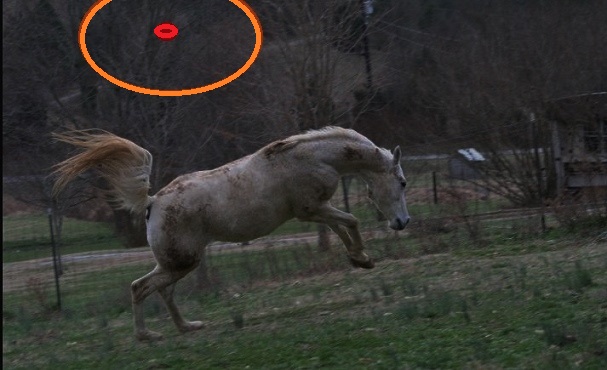 HORSE AND OWNER FRIGHTENED BY ALIEN RED ORB IN TEXAS

I just reported some orange lights I have been seeing lately at my new barn in Crowley, Texas. It’s further out in the country so there are not as many lights from the city and I am able to see the sky better. I am reporting something else that happened on August 10th at about 10:00 PM at my barn.  I had put my horses up for the night and was standing in the paddock with a horse I had helped bring in. The horse was friendly and wanted to be petted so I stayed for a little bit to pet him. We were both looking over the fence toward the road that goes over a hill. There is a very large ranch and ranch house there with a big old bell tower next to it. All of a sudden between the tower and a tree very low over the hill a red light appeared.

It got really big, about the size of the end of my finger if held out to where it filled the space completely between the tree and the tower. The horse just shot straight up in the air and bucked then kept bucking and running. The light just all of a sudden disappeared! But the horse would not stop. It never acted like that before and it was hard to get out of the way so I climbed over the fence and left! I don’t know what the light was, but I know the horse saw it too and it scared him.    NOTE: The above image is a rendering.

THANKS TO WWW.UFOSNW.COM  AND WILLIAM PUCKETT