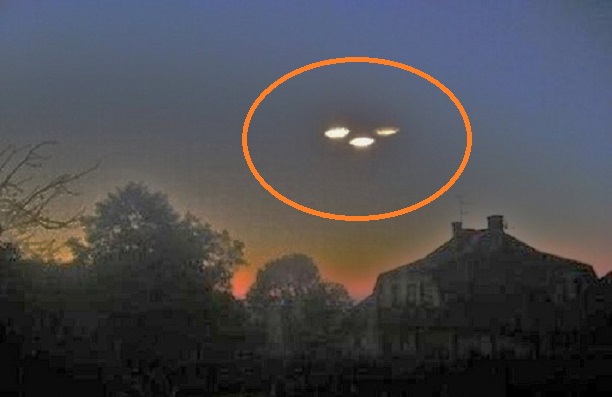 CLOSE ENCOUNTER WITH AN ALIEN CRAFT OVER TEXAS

The sighting occurred over my southern facing home in southwest Fort Worth near Benbrook Lake in the early morning hours at 7:45 AM Central Standard Time on December 10, 2010 (I confirmed the date and time by reviewing my text message to a friend with whom I shared the experience). I was rolling out the garbage bins for Friday morning Pick-up and the triangular shaped craft, with 3 soft glowing well defined lights beneath, was moving very slowly at a diagonal from my right to the left with no sound. I am accustomed to seeing aircraft which originate from or travel toward Carswell, AFB; however, this craft was on a trajectory outside of the usual flight paths I’ve witnessed.  The shape of the craft was distinguishable as a dark silhouette against the background of the early morning sky, and the 3 equally proportioned lights were the dominant feature. At a higher altitude, there was a military fighter aircraft too small to identify, but was still audible. I watched for about 2 minutes, as the craft grew closer and eventually passed directly overhead. I looked to my left and saw a neighbor in in car about 3 houses down; however, this person was not a co-witness. I remained in place and continued to watch. In the time I looked left again, toward my neighbor’s moving car, the craft disappeared in a blink. My initial thought was that in a clear blue sky, I should be able to reacquire the craft, as there was no way a conventional aircraft could have disappeared so suddenly. The sky was cloudless, my view was unobstructed. I was unable to take a picture at that moment, but have discovered a photo that fits the description, the time of day and similar weather conditions under which I witnessed the UFO.  NOTE: The above photo is a witness rendering.

2 thoughts on “CLOSE ENCOUNTER WITH AN ALIEN CRAFT OVER TEXAS”