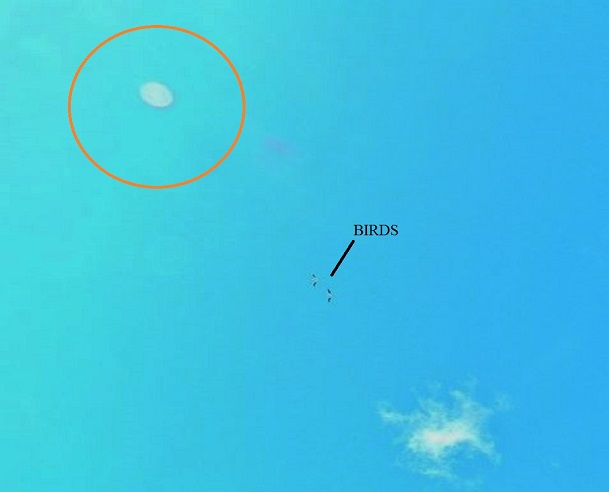 SEPTEMBER 2, 2013  …  CASS LAKE MINNESOTA
Allison Barta of rural Cass Lake, Minn., took this photo on Sept. 2, 2013. She said the object on the top left corner is not a lens flare, and that she spotted the saucer-shaped object with the naked eye.  It was in the sky, translucent, circular, disc-like and most certainly, positively and identifiably unidentifiable. It was also an object that was flying.  For the moment, we were pretty dumbfounded,” she said of her and her friend, Neil Peterson. “The two of us are watching it zoom across the sky, and I’m trying to get another picture of it, but I couldn’t catch it.”  The lone image she did capture, however, might be enough to whet the appetites of UFO enthusiasts, believers, identifiers, or whatever they prefer to be called.  The object is… something.  Barta was taking pictures of pelicans outside her rural Cass Lake home in northern Minnesota on Labor Day, Sept. 2. That’s when she saw the saucer, which spanned the horizon in just a few seconds at an incredible speed, she said. The pelicans are in the photo. The object is, too.  “Was it a drone? Was it somebody who actually created something and they were flying it? Was it a real UFO from another planet?” she said. “It’s not an aircraft known to this planet. I don’t really know what it is.”  Barta, a science teacher at the Bug O Nay Ge Shig school, has spent plenty of time looking at the sky. In fact, a few years back, she spent an entire summer gazing upward, mapping stellar bodies for a program called “Star Watch.” She urged her students to do the same.  But in all those nights, there was never anything so obviously unidentifiable.  “I’m kind of thrilled I saw it,” she said.  Barta is not concerned with the tinfoil-hat implications of walking around and showing off a picture of a UFO. She said the majority of people she’s approached have expressed interest in viewing the photo.  “The reactions are amazing,” Barta said. “There’s only been very few people that just walked away and don’t want to see it. I’m not standing there and going ‘Oh, it’s aliens.’ But it’s definitely not a lens flare, cause we saw it with the naked eye.”  Barta considers herself fairly handy with a camera, but after initially catching the object in her lens, she couldn’t catch up with it again. There is only the one shot. She compared it to winning the lottery.  “What are the chances of getting that picture?” she said. “You need to not be afraid to share, so I’m sharing it. We all live on this Earth and we should look out for each other.”  Justin Glawe reports for the Bemidji Pioneer.  NOTE:  The above image is a rendering.

1 thought on “ALIEN CRAFT OVER MINNESOTA CAPTURED ON CAMERA”