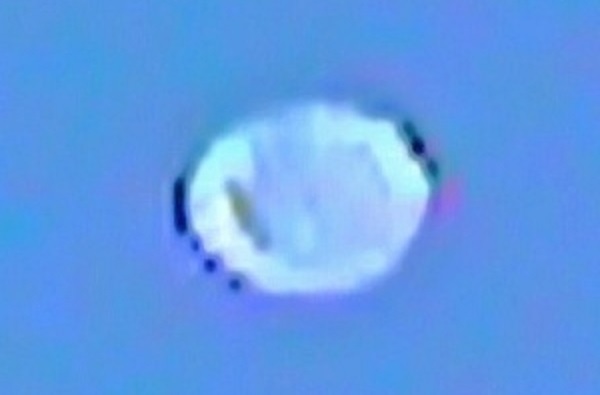 Approximately 11:30 am, I arrived at home from work in Socorro, NM. I had gone home to paint my garage floor during lunch. After talking to my wife she went outside to play with my 2 yr old son. Within a few minutes she called me and I went outside to investigate. She pointed to an object in the sky. I looked up and saw what appeared to be a well defined globular object of a whitish color with a brightish tinge of bluish purple. At first I thought it must be a high altitude balloon or maybe a satellite. It appeared very distant but sizable and at first appeared to be hardly moving. Its relative position was away from the sun with a clear sky and thus could be clearly seen almost directly East to NE.  At this point I ran back inside for a camera and took a picture using my personal phone camera. The object was strange enough to warrant further observation. At this point I thought I’d better get it on tape, so I scrambled to find the camcorder, at this point hoping I would be quick enough to catch it when I got back No issue the object had planned to stick around!  I began taking footage with my camcorder, and notice that other similar objects also show up on the camcorder screen besides the one that was visible with the naked eye and would appear to go from a globe shape to a diamond shape (probably artifacts I thought). At this point I wanted to know what it was so I grabbed my telescope. The object still stuck around, now at a position almost directly overhead but appeared to be far far away.

My first observation when my telescope was focused on the object was that of what appeared to be a perfect sphere with a bluish purplish hue with what appeared to be perforations or little dots (Imagine drawing a circle on paper and filling out the circle with dots). As far as I know this could have been a planet. However the telescope was removed from looking at the object and refocused several times from different positions in our backyard with the same result.  We thought, well, strange object and stopped recording, since we already had it on tape and it didn’t do anything new but continued using the telescope. The object then transitioned to the SSE within the next 10 minutes, but now at a faster rate than it was moving previously.  While I was looking at the object through the telescope, I saw a bright green flash in the scope and my wife yelled that the object had separated into two, what appeared to be identical objects. When I looked up from the scope, I saw now two, what appeared to be two almost identical objects moving in unison with each other. My wife mentioned that during the separation there appeared to some kind of smoke trail and a long cylindrical object that fell earthwards in a wobbly pattern during the separation (I hope someone finds it, whatever it was). When observed again in the telescope, the initial bluish purple hue, object was still there, but now seemed to have a smaller black object in front that obscured a portion of the purplish bluish sphere.  The objects then appeared to transition together at a lower level across the SSE to Eastern horizon and now appeared even more distant and was no longer visible to the naked eye. I am sure there is some logical explanation. One is that it may have been a weather balloon test; not to mention atmospheric turbulence and tricky sunlight. Times we saw the objects clearly visible: 11:35 AM Mountain Time to 12:50 PM Mountain Time. Wish I had camera attachment on my telescope, this was the most amazing!