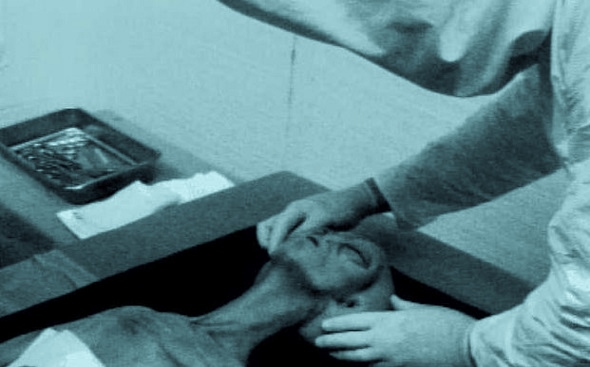 Famed researcher Raymond Fowler first broke the details of this event of May 20, 1953 in 1973, although it was known to UFO investigator Richard Hall as early as 1964. Fowler stated that his information came from engineer “Fritz Werner,” later identified as Arthur G. Stancil.  Stancil graduated from Ohio University in 1949 and was first employed by Air Material Command at Wright-Patterson Air Force Base in Dayton, Ohio as a mechanical engineer on testing Air Force aircraft engines.  Dr. Eric Wang, who was suspected of leading a reverse engineering team on alien craft, headed the Installations Division within the Office of Special Studies where Arthur worked.  Stancil signed a legal affidavit vouching to the honesty of his testimony, which was released by Ray Fowler in UFO Magazine, April 1976. He was working for a company that had a government contract at a nuclear site in Nevada. He was summoned by his boss on 5-21-53, and sent on a “secret” assignment.  After being flown to Phoenix, Arizona, he was placed on a bus with blacked out windows, and taken to a point some four hours drive northwest of the city of Phoenix proper. The location was supposedly near the city of Kingman, Arizona. The bus was full of passengers, none of whom Stancil knew, and would not know, as they were told not to communicate with each other. Arriving at their secret destination, two military light-alls illuminated a surreal scene in the late night, pre-dawn skies of the desert.

The engineer was amazed to see a disc-shaped craft embedded into the sand.  Stancil estimated its diameter to be about 30 feet. Military personnel surrounded the aluminum-like craft, which was brought down by either an internal explosion, or was hit by military rockets, Stancil surmised. The wound was easily seen, a gaping hole in its side. Stancil’s duty was to calculate the speed of the craft, a task he quickly discharged. Afterwards, the tense atmosphere of the group of investigators began to loosen some, and he began to glean details from some of the other personnel assigned to this “off the record” mission. He was told of a small cabin inside the craft, and very small chairs.  He did not get to look into the unknown craft himself. He was taken back when he peeked into a nearby medical tent. Inside was the small body of a “creature,” about 4 foot tall. He asserts that the alien was wearing a type of skull cap, and a silver suit. The suit seemed to be seamless. Soon the investigation was called to a halt, and the members summoned to leave the area. Back on the bus, all of the members of the assignment were ordered to sign the “official secrets” act, and were warned not to discuss what they had seen with anyone. Before bringing the crash story to other UFO groups, Fowler did a thorough background check on Stancil, and was satisfied to his authenticity, and personal integrity.  Fowler also was persuaded beyond doubt as to the ability of Stancil to do his job, as he came forward with great knowledge of his field and occupation. There was additional confirmation to the validity of the Arizona crash. Personnel at Wright Patterson AFB claimed to have been witness to the delivery from a “crash site” in Arizona. These witnesses claimed to have seen “three small bodies packed in dry ice.” The beings were reported as being about 4 foot tall, with large heads, and brownish skin color. The time of the delivery perfectly coincided with the events put forth by Stancil. Unfortunately, the military personnel could not make their names public. Fowler maintains that several other witnesses have come forward in the years following the incident.  NOTE: The above image is a rendering.

11 thoughts on “ALIEN CRAFT AND BODY DISCOVERED IN ARIZONA”