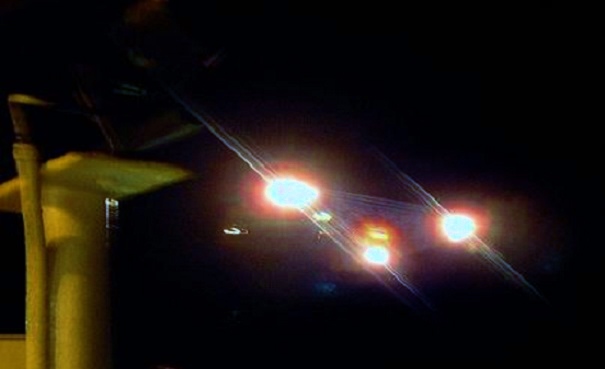 AMAZING CLOSE ENCOUNTER OUTSIDE OF ANDREWS AIRFORCE BASE NEAR WASHINGTON D.C.

I was driving home from work on the Sunday morning after Christmas 12/26/2010 at 2:25 am and it was snowing lightly.  I was traveling on Matta-Woman Beantown Road going from 301 south to Rt. 5. I was approximately half way down the road, where the park and ride is located, when I saw a huge aircraft about 200 ft in length emerge out of the clouds about 100 ft over the tree line.  The first thing I noticed when I saw the craft was that it had an unusual amount of lights on the front of it to be an airplane. Being that I am in the aerospace industry I see large aircraft on a daily basis, and none of them have that many lights.  Nevertheless, I was just thinking it was a large plane flying low. I continued driving slowly and watching it and shortly after it came out of the clouds, it banked a hard right maybe 60 degrees or more, and at this point I could see the entire shape of the craft.  It had lights covering the entire perimeter of the craft and what seemed like what would be the cockpit/fuselage. It had lights surrounding that part too.  In the center of the craft where the fuselage would be, there was a red blinking light on top of the craft and one on the bottom. This is what is called an anti-collision light required by all aircraft flying in US airspace.  I got excited at this point because I thought it was a B-2 bomber and I have never seen one before in person. So I was not sure of the light pattern. It had the exact same shape a B-2 except the tail of the craft cut straight across from wing tip to wing tip. The B-2 has several triangle shapes on the tail of the aircraft. Once the craft came out of its 6o degree bank and leveled off, it just sat in one spot and did not move.  At this point I pulled over because I was amazed that it stopped and hovered. I did not think this was a UFO, but was just some sort of aircraft that didn’t exist. So I pulled over and got out of the car expecting to hear a very loud engine running because the craft was hovering and it takes a lot of power to hover an aircraft. I got out and I heard nothing but silence.  That’s when my heart started to beat really fast because I had an idea of what I was seeing. I went to grab my phone to take a picture and the lights just went out. I could still see the craft in the sky being that it was no more than 75 ft from me and it was slowing, so it was easy to see.  The craft was dark, almost black, and I could still easily see it hovering. I watched it for about 5 minutes with its lights off just sitting there hovering.  After the 5 minutes, it just started to slowly move out of sight and that was the last I saw of it. I did not hear any jet aircraft in the area which I thought was weird because I was just outside of Andrews Air Force base and you can’t get near that place without setting off some sort of alarm.  I know of 3 aircraft that can hover and two of those are stationed in the area I work and live, those being the Osprey and Joint Strike Fighter. Both of these make a lot of noise. This craft made absolutely no noise and just sat there and hovered.  I haven’t the slightest idea of what I saw that night. I’m not sure it was man made or not of this earth. I’m leaning towards man made because of the anti-collision lights located on it.  But I know of no aircraft that is 200 ft. in length and can hover without making any noise. I will truly never forget this experience.  KENS NOTE:  I feel these alien craft are starting to resemble our military craft, especially the lights.  How easy would it be to replicate our aircraft lighting systems on their alien craft.  Remember, they aliens are very intelligent and hiding in plain sight would be a great technique. The above image is a rendering.