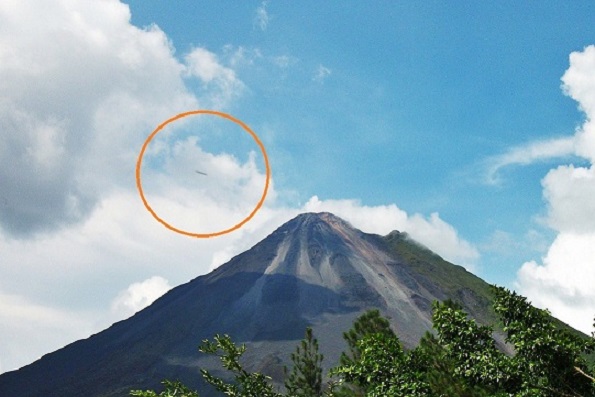 We were on vacation in Costa Rica where I am from originally.  I live in the USA. Me and my girlfriend and one of my uncles went to Arenal lodge in Costa Rica which is a popular tourist destination because the volcano is fairly active. It displays lava flows aproximately every 8 hours and also people have said there is UFO activity in the area. I am a believer in ufo’s and love natural displays such as a volcanoe erupting, the night before my girlfriend snaped that picture, we saw a white bright intermitting light come down to the forest at the bottom of the volcanoe then dissapear. A short time later it reemerged to the north where the arenal lake is which is used for hydroelectric power. The light went up. It stopped half way between the water and the clouds, there were spotlight shining at it from the ground.  Several like 5 or six.  Then the light went up into the clouds and dissapeared. I asked my uncle if there was a small plane airport close by because of the spotlights, he said no. Anyways something brings this ufos to this area.  Important to note that Nasa has a hanger at the Juan Santamaria International airport.  They put it there in the 90′s incidently after UFO resort in San Jose the capital. They said it was to study atmospheric changes.

KENS NOTE: Arenal Volcano Region is a large resort in Costa Rica.  There has been alot of UFO activity in the area for a long time.  The fact that NASA has a hanger at the International Airport makes me very suspicious.  NOTE: The above image is rendering.

4 thoughts on “UFO ACTIVITY OVER A COSTA RICA VOLCANO”