Ken Pfeifer[right] is the Chief Investigator for MUFON New Jersey and Founder and Editor of World UFO Photos.  His job is to receive reports of unusual lights, aircraft or other phenomenon that could possibly be evidence of alien encounters.

Ken gets reports from just about everywhere and from just about every kind of person. With the popularity of cellphone cameras and miniture digitial still and video technology, the stories Ken receives often have visual proof to back them up. We have quite a few on viewzone HERE. Ken agreed to answer some of our questions:

viewzone:What is the most convincing evidence of a UFO that you have seen in your work?

The most convincing evidence of a UFO that I have ever seen is the case I investigated in the Alloway Township area of South Jersey. The witness statement is below:

BRIDGETON (NJ) — I interviewed C.S. concerning his recent sightings and he provided this drawing of the flying triangle that passed over his astronomical observatory on October 13, 2006, at 12: 45 AM. He states,”I was confronted with an enormous object clearly defined by ambient light. I thought it was crashing but as it approached my observatory it began to rise. This thing was barely moving forward, and could not have been more than 200 feet above me, probably less. I could make out detail of rivets and bolts in its construction. As the objects rounded nose began to approach me, I was really taken back by its brightly lit windows. I was shocked to see a humanoid form moving as if it were pacing back and forth, in the large port window about eight feet square. As it got closer the figure moved away from the window. The figure is shown in the upper right side of the drawing. I thought there was no one at the controls. I got the impression it was getting ready to hover as its open hatch moved directly over me and I was entertaining some negative thoughts regarding my own safety.” 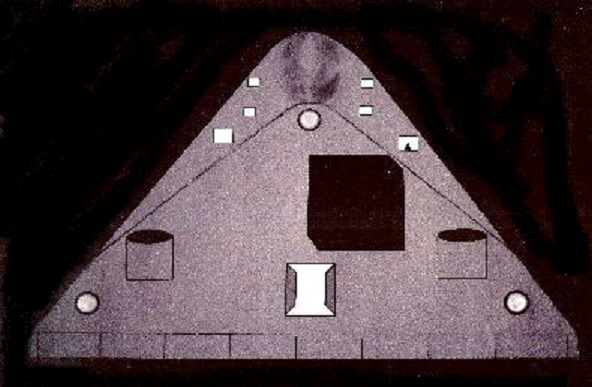 “It was at least two stories high with two large windows, port and starboard, it had a rounded nose, there were three opaque light type structures, two large turbo type structures, larger in diameter and shorter in length than those on commercial aircraft. Eight flap or stabilizer type structures aft, a very large square black container type structure protruding off center from its belly. An open hatch, and other bulky geometric shapes that I saw but I can only remember they were thick, huge, bulky with an incredible amount of drag that it could not be an aerodynamic possibility. Almost immediately I felt a surge of static electricity that tingled my face and hair on my arms and head. As its tail section was about to pass over me I quickly swung the dome and heard a low pitched roar with the sound of bacon sizzling in a frying pan. Suddenly it was gone, no sound, and I did a 360 degree search but it suddenly there was nothing there.”

KENS NOTE:  I interviewed the witness shortly after the sighting and he was still physically shaken. He was afraid to go out to his observatory for a couple months after his encounter.

I have enclosed a copy of his drawing of the triangle [above]. After months of interviewing neighbors, I closed out the case as “unknown”. The crazy thing about the whole investigation was that the neighbors did not want to talk to us at all. They were all very rude and just turned their back on us and walked away! Even the witness, who knew some of his neighbors, did not get any cooperation from them.  “C.S.” and his wife were new to the community. He had lived there approximately 6 months before the encounter.

It was the strangest case I have ever had. We came to the conclusion that the triangle must of been looking for cows or horses. This area of South Jersey is covered with farms. The large black container under the triangle was probably use for collecting animals.

Then something strange happened  — 11 months after this sighting. The witness, C.J., had another sighting. But this time he had some great photos to show!

9-24-07 Alloway Township New Jersey. MUFON case 8111. The witness statement is:”The night of September 24, 2007 was brightly lit due to a full moon. It was approximately 11:30pm and I was outside with a digital camera nearby. I had nothing special in mind but, due to the bizarre experience I had last October 2006 (this experience has been recorded on the Mufon web site), I always keep a camera on hand when I’m out at night.

A bright light again caught my eye and I observed this rectangular shaped light begin to rise slowly behind a tree line in the south approximately 1 mile away. This object appeared to hover for about 20 seconds and then began to travel west at a very slow speed.

As it began moving west, it seemed to pivot on both the vertical and horizontal axis revealing more detail until it disappeared behind a tree line. I captured this object with my digital and the pictures came out surprisingly well. I use a Canon 20D-A which I use for astrophotography. I have transferred these images to a disc.” 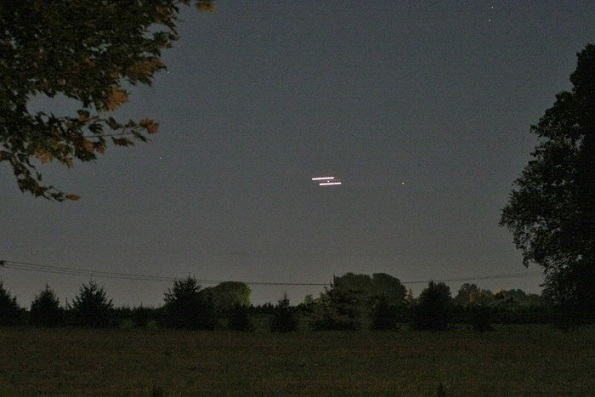 KENS NOTE: This witness had now become an investigator for MUFON because of his first triangle sighting. I was the Chief Investigator and we finally closed out the case as “unknown”. Of course we got no cooperation from the neighbors.

There are many high power lines in this area because they are converging at the Salem Nuclear Plant 13 miles away and Dover Air Force Base sits 26 miles away.  The witness is no longer an investigator for personal reasons. I believe he has mover to Delaware.

viewzone:What do you think the aliens are up to?

Ken:“Personally I think the Aliens are investigating our Earth for a possible place to live or for our resources. Even though we are a very unique planet, I feel there are thousands and possibly millions of planets just like ours are spread throughout the universe. The aliens must of found some way of reaching far destinations in a short time.I also feel our earth has been here for billions of years and we are only one of a thousand different civilizations that have come and gone over the centuries. The big question is, when will it be our turn to disappear?  December 2012 could be the date but I really do not think so. We will still be here, killing our brother and slowly destroying this beautiful planet.

viewzone:What things would you like people to know about UFOs, aliens and such?

KeN:“I feel people have to be educated about alien life. If they can accept the fact that these things exist, it will be less of a shock when disclosure comes. I am glad that people like you and me can spread the word and I am excited that the news media is starting to report ufo sightings all over the world.With everyone basically walking around with a camera or video capablilties with their phones, we are getting more videos every day. We are living in exciting times and I feel I will be alive when disclosure happens. Our world will be changed forever. Some for the good and some for the bad.

Possibly these aliens will have cures for our diseases and better ideas on energy. Fossil fuels must go. Many people will jump out of windows because they will not be able to accept the fact that aliens exist. Religion has contaminated their minds. Religion will be changed, for the good I hope.  Maybe the aliens can answer some of the questions that have haunted us for thousands of years. I am looking forward to it.”

SPECIAL THANKS TO GARY VEY  AND WWW.VIEWZONE.COM