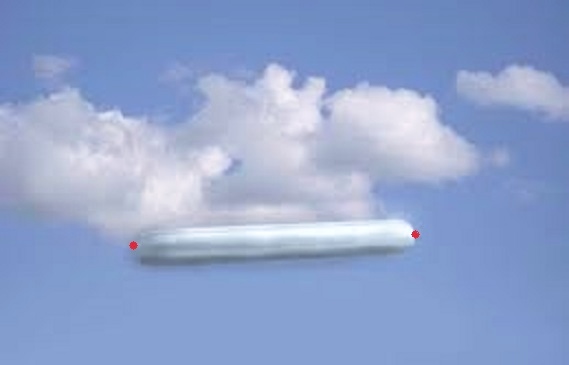 AIR FORCE COVER UP OF AN ALIEN CRAFT OVER CALIFORNIA

On August 13, 1960 two CHP officers were on patrol near Corning, CA when they witnessed what they thought was an airliner about to crash. When the UFO had descended to about 100 or 200 feet altitude it suddenly reversed direction and climbed to 500 ft. The object was described as round or oblong surrounded by a glow and having definite red lights at each end.  California Highway Patrol Officers Charles A. Carson and Stanley Scott were on duty on Hoag Road, east of Corning, California when they saw what looked like a huge airliner descending from the sky in front of them. Thinking that a plane was about to crash, they stopped and got out of the car to get a better look. They watched as the object descended in complete silence to about 100 to 200 feet from the ground, then suddenly reversed and climbed back to about 500 feet from the ground and stopped. Officer Carson described it in a police teletype report:  At this time it was clearly visible to both of us. It was surrounded by a low making the round or oblong object visible. At each end, or each side of the object, there were definite red lights. At times about five white lights were visible between the red lights. As we watched the object moved again and performed aerial feats that were actually unbelievable.  The officers radioed the Tehama County Sheriff’s Office and asked Deputy Clarence Fry to contact the local USAF radar station at Red Bluff. Deputy Fry reported back that the radar station verified that an unidentified object was visible on radar.  On two occasions the object came directly towards the patrol vehicle; each time it approached, the object turned, swept the area with a huge red light. Officer Scott turned the red light on the patrol vehicle towards the object, and it immediately went away from us. We observed the object use the red beam approximately 6 or 7 times, sweeping the sky and ground areas.  The object then began to move slowly to the east, and the officers followed. When they had reached the Vina Plains Fire Station, the object was approached by a second object that came from the south. The second object moved near to the first and both stopped and hovered for some time, occasionally emitting red beams. After a time, both objects vanished below the eastern horizon. They had observed the first object for a total of about two hours and fifteen minutes. When they returned to the Tehama County Sheriff’s Office, they found that the object had also been seen by Deputies Fry and Montgomery, as well as by the night jailer. All described the same thing.  The next day, Officers Carson and Scott drove to the Red Bluff Air Station to discuss the sighting and to speak to the operator that had seen it on radar. The Air Force, however, now denied that the object had been seen on radar, contradicting what the radar operator had told Deputy Fry the night before.  NOTE: The above image is a rendering.