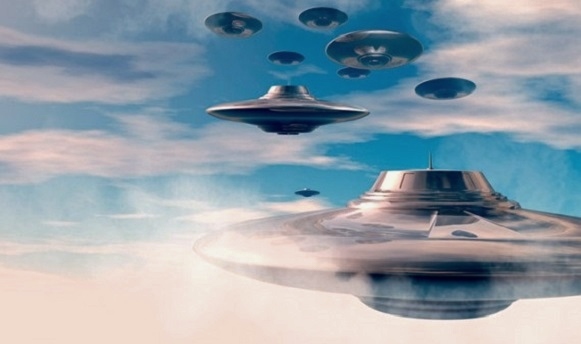 ALIEN SAUCER SHOT DOWN AND CRASHED IN RUSSIA

Well known Russian UFO investigator Nikolay Subbotin relates an amazing story of a battle of flying saucers. This incident allegedly took place in the skies of Zaostrovka, in Russia in 1989. On September 16, six circular, silver, flying saucers ganged up and fought a seventh, golden saucer, in full view of the residents of the town and surrounding areas. Hundreds of witnesses watched the gang of six chase the golden saucer out of a cloud bank. All of the saucers made unbelievable maneuvers during this dog fight, and at times, the UFOs flew as low as 5,000 feet. The weapon of choice was a strong beam of light or energy fired at and from the escaping golden UFO. According to the RUFORS Internet newsletter, an account of this event was published in the local newspaper, “Semipalatinsk.” According to this report, written by a Russian helicopter commander in the Afghan war, the energy emitted during this battle shut down the local power grid in Zaostrovka, plunging the city into total darkness for a time.  The author, named Sichenko, interviewed witnesses of the event, publishing many of their fantastic accounts of the events that day. The witnesses claimed that the outnumbered golden UFO finally was defeated, losing altitude due to the continued hits by the energy beams. The failing saucer at first seemed to be attempting to make a controlled landing, but eventually it lost control, disappearing from view behind a house as it plunged to the ground. The six assaulting saucers soon disappeared from view, heading into the clouds. Subbotin discovered that the lost saucer had crashed into a bog on a military test range. This area was “off limits” to the general public. It would be about a year before he and accompanying researchers could reach the site of the crash, but by that time, the area was clean, free of any trace of a crashed vehicle. Subbotin would learn that a military team had descended on the boggy area, and conducted a full search and rescue operation. There were reported injuries during this operation. Russian Ufologist Emil Bachurin was able to see medical files which confirmed details of injuries to military personnel involved in the mission. It would be reported that several members of the search and rescue team had leaked information about the operation, but their breach of confidence was discovered, and security was made even tighter.  Also, an airplane attempting to fly over the area and gather details about the crash had to abort its mission because of instrument malfunction. Eventually, all activities at the military range were shut down, and the base put under heavy guard. This case is very similar to another Russian case, the Shaitan Mazar Crash, which also involved Subbotin and Bachurin. If the event of 1989 is true, there is a downed flying saucer in the possession of the Russian military, or possibly being guarded by the military in its own icy grave in the city of Zaostrovka. NOTE: The above image is a rendering.

6 thoughts on “ALIEN SAUCER SHOT DOWN AND CRASHED IN RUSSIA”