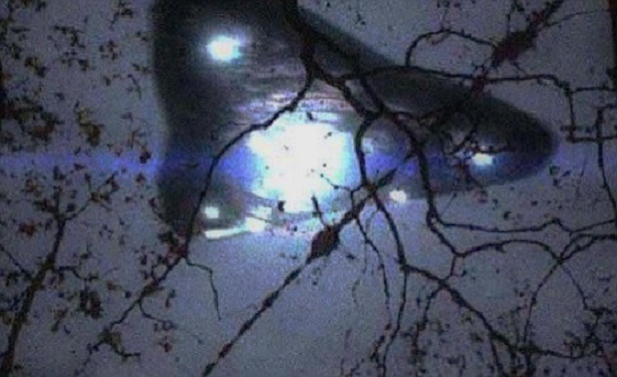 I’ve lived close to McGuire Air Force Base (now Joint Base McGuire Dix Lakehurst) my entire life. There are also several small rural airports for single engine planes and helicopters in the area, along with air traffic from Philadelphia, Trenton-Mercer, Atlantic City, North Jersey & New York area airports. After the time change in early November, the large number of air traffic in the sky has caught my attention on my ride home, but this encounter was different from what I’m used to seeing. Conditions: Night/dark, clear skies (if there were clouds they were not noticeable or did not play a part in what I saw because I don’t remember them and there were lots of stars). My encounter: Driving home from work on November 20, 2013 at approx 18:15 hrs, I was headed south on Route 206 in Southampton, NJ  approaching the area of Main Street/Retreat Rd intersection, when I noticed an object flying about the same speed as a small single engine aircraft off to about my 1 oclock view (South/Southwest part of sky). There are several small rural airports for small size aircraft in the vicinity so I initially thought I was seeing a small single engine airplane lining up for landing at one of them. The object was flying (sort of) toward me, headed North/Northeast. The object almost reached Main Street and made a quick 180 degree turn flying back toward Red Lion Rd, headed South/Southwest again. As I passed Main Street, trees along Route 206 started occasionally blocking my view, but in between breaks in the trees I was able to see it make two more quick turns flying in a criss-cross pattern over the wooded and farm areas in the vicinity of Red Lion & Hilliards Bridge Rds before disappearing from my view again. I initially assumed it was a plane positioning itself to land at the Red Lion Airport, but the sudden quick turns I witnessed from the craft and the triangle light pattern on the underside of the craft left me puzzled. As I continued travelling down Route 206, each time there was a clearing/opening in the trees I would see the aircraft. I kept watching toward the airport to see if I could catch it landing when the trees opened up again. As I approached the area of Ridge Rd I realized the craft was now headed in a path that would cross over route 206, from approx West/Southwest toward East/Northeast. It had also slowed down quite a bit and, as I got closer, I realized it was going to cross over the highway right over top of me. At this point I also realized the craft was much larger than a small single engine plane. Because we are in close proximity to the military base and this is the exact location where Ive encountered military aircraft positioning themselves for landing I now assumed it was military aircraft. I opened my sun/moon roof and cracked my windows so I could hear the plane as it went over me. As we intersected each other the craft seemed a little slower and lower than what I am used to seeing on this flight path. It had an engine noise, but was much quieter and had less of a rumble than the usual large military aircraft that had fly over me before. I could see a small portion of the underside of the aircraft between the three bright white lights and it appeared to be same color and/or pattern (maybe panels?) I would expect to see on the underside of a large airplane. The silhouette against the night sky also appeared that the object itself was triangle in shape with one solid white light at each corner, explaining the triange light pattern. After the object flew over me it took about 15 seconds (give or take a couple seconds) to reach the Red Lion Circle where the sky is much more open. As I went around the circle and looked back to where I would expect the object to be flying I could not locate this aircraft again. I consider myself to be a skeptical person, but I am opened to the possibility of unexplained experiences. After thinking about it, several things did not make sense to me. 1) The initial flight pattern I witnessed seemed too quick and sudden for this large of an aircraft. 2) I wondered the possibility I had seen two different aircraft, but I really do not think so. The light pattern is what caught my attention. The three solid, bright, white lights in a triangle pattern with no other lights. All aircraft I remember seeing usually have at least one or more blinking lights somewhere on the plane, sometimes in a different color. This did not. 3) The craft was also flying much lower and slower than usual, since it was still several miles (maybe even 10 or more miles) to the runway at JBMDL. 4) Where did it go when I looked back for it about 15 seconds after it flew over me? 4) I also thought about the possibility it was a drone since there is a lot of talk about drones these days. It seemed a little larger than I would expect of a drone, but I dont know a lot about them. It did have an engine sound, although quieter and less of a rumble than I would normally expect from aircraft of that size. Technology is ever changing, so who knows. At this point I have not been able to put a name to what I saw, so it is (to me) a UFO. Would love to know if there is a valid explanation or if anyone else saw what I saw that night. NOTE : The above image is a rendering.

KEN’S NOTE:  The witness may of seen the same craft that I saw over Franklinville New Jersey a few weeks ago.  These large objects seem to be capable of very slow flight which is not normal for conventional airplanes.  I will investigate this case for MUFON New Jersey.