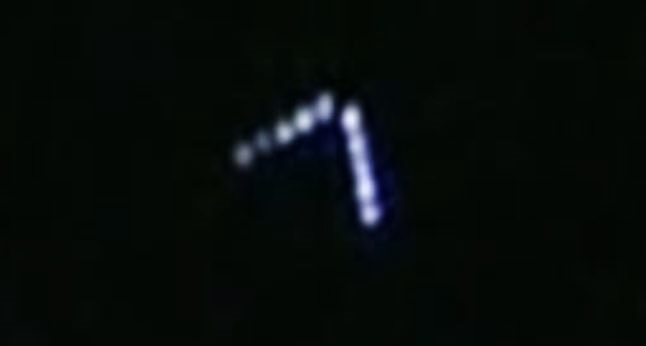 Large, silent V-shaped craft spotted traveling southeast quickly in a linear path.  I was taking my dog out in my backyard and looking at the sky since it was unusually clear. While looking at some stars I noticed slightly dimmer lights (yellowish-white) in a V-shaped formation moving across the sky.  I quickly reached for my iPhone in my pocket, looked down to pull up the camera, but by the time I was ready to take a picture, the object was passing over some trees.  I did not have the time to count the amount of lights but I would approximate there were about a little over a dozen.  They were about the size of the stars-that is, they were tiny lights, not large. These yellowish-white lights did not flicker or blink and were very close together, about six or seven forming each arm of the V-shape.  Since the sky was very clear and dark, I could not make out an actual shape of the aircraft aside from the shape the lights made. The V-shape was neither too wide nor too narrow. It was shaped like a normal “V”.  The aircraft was silent, but massive. If you stretch out your arm and separate your thumb and pointer fingers by about 2.5 to 3 inches, you will get a pretty good idea of how large it was.  It moved very quickly across the sky in a linear path, meaning it wasn’t zig zagging around. I pulled up the compass on my phone to see exactly what direction it was heading in-it was heading around 150 degrees southeast, and coming from the north or northwest direction.  NOTE: The above image was photographed in Yantai China on May,21 2011.